Tom Brokaw Says Both Parties Should Talk About Guns 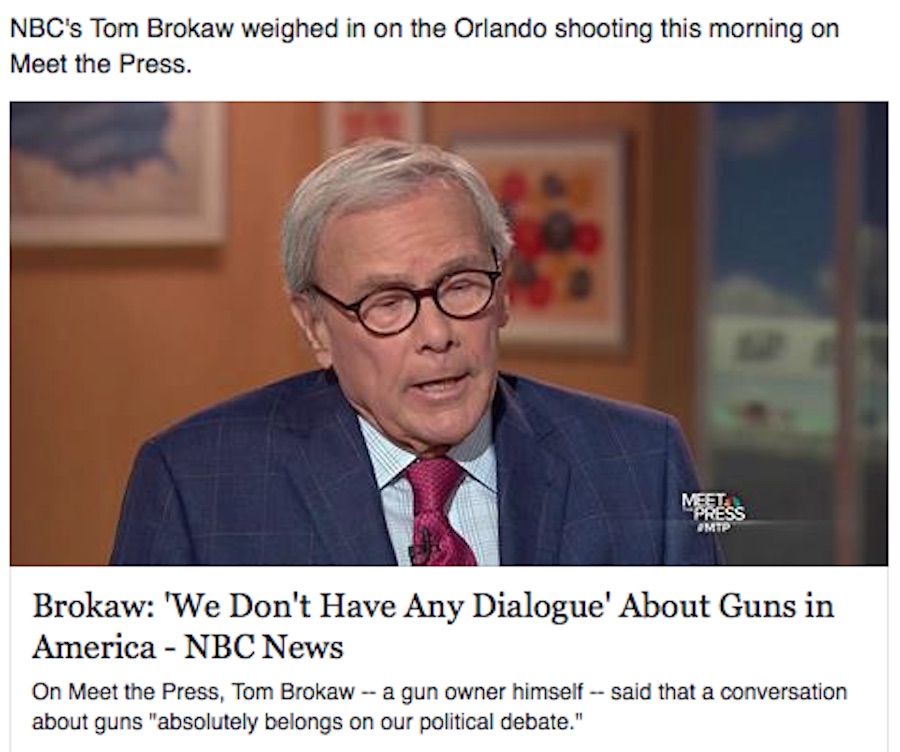 What planet has Tom Brokaw been living on?

Brokaw responds with a beautiful quote that all Americans need to acknowledge: “It shouldn’t matter. If it turns out to be connected to some sort of international group, politicians are going to jump all over it and say ‘we gotta do something about them.’ Say its a domestic shooting. We’ve gotta do something about that. I’m a gun owner, I’ve been saying this for months now that we have to come together and say “enough. If he had an assault weapon, it was an AR-14, [General] Stanley McChrystal said it’s not to be in civilian hands, it’s designed to do one thing – to kill people. We don’t have any dialogue going on in America about all these mass shootings that have occurred since San Bernadino, three or more killed at a time. This absolutely belongs in a political debate and it ought to be a place for both parties can talk about it in a rational fashion. You got a problem? Get a gun. That’s all the dialog we have now, and it’s got to come to an end.”

"Both" parties can talk about it in a rational fashion?

What the fuck, man? This President has been talking about this for years. Years.

He has said, over and over again, we need to stop this, we need to do something, we need to respect the rights of gun owners who are no threat and we need to get control over who buys the deadliest assault weapons. We need to limit the size of magazines. We need to have responsible policies about who can own a gun while keeping them out of the hands of wife beaters, the mentally ill, and those suffering from dementia.

What you didn't see today was Tom Brokaw being honest. He was serving the corporation, and he was going out of his way not to upset conservatives because that's what NBC News does--it makes it easier for people to feel good about themselves even though they are the direct cause of the problem at hand. It is the ultimate dodge for Brokaw to go out there and throw up his hands and say "both parties need to talk about this" because it serves the interests of the people who are obstructing progress on the issue. It serves a corporate master who doesn't want to spend all day tomorrow answering unhappy phone calls from Republicans who are mad that someone gave them serious butt hurt by pointing out that their inability to think rationally helped kill more Americans today. It was a cowardly thing to say and it does not serve the public interest to try and make the phony case that both parties have to somehow solve this.

Fuck no, Tom Brokaw. That is absolutely, without a doubt, fucking wrong.

This president has been trying to do this for Y-E-A-R-S. And, every time he tries to do something, the other party and the National Rifle Association comes up with a reason to stampede their supporters into stockpiling more guns, they shut down legislation in Congress, and they go on television and warn everyone that President Obama is going to take away their guns.

Don't bring this "both parties can talk about it in a rational fashion" bullshit in here when one party HAS BEEN TALKING ABOUT IT while the other party fundraises off of fear and ignorance. Ever heard of the phrase, "the only thing that can stop a bad guy with a gun is a good guy with a gun?" No, well, you can be rest assured--a Democrat didn't come up with that gem. This is about as asinine as it gets, and it will not get any better unless and until the lock on Congress is broken and we have a return to sanity.