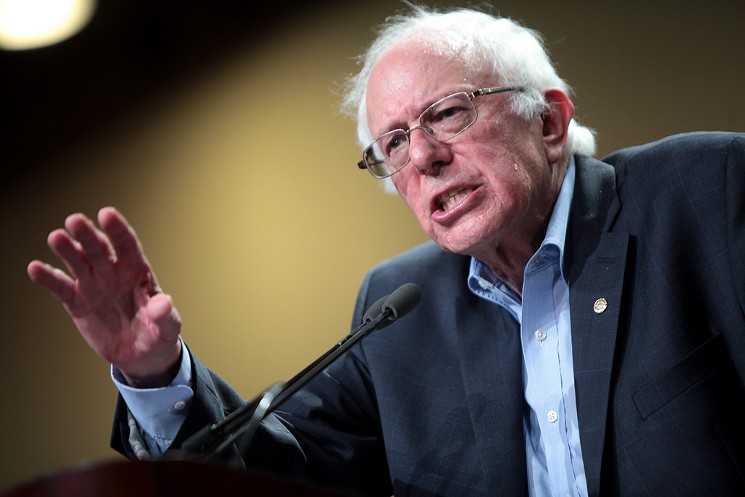 I don't know how many more times I can hear this argument:

Turning toward the Democratic superdelegates who do not formally vote until the convention, Sanders said they should look hard at polling data and argued that he is best positioned to take on Trump in the fall campaign.

“I should point out to all of the Democratic delegates going to Philadelphia: In every instance, we beat Trump by far larger margins than does Hillary Clinton,” he said.

This line of reasoning is complete and unadulterated bullshit. Sanders can't claim to have more "energy" because, hello--his own voters don't show up and vote. If they did, he wouldn't be several million votes behind the woman who beat him by reaching the total number of delegates needed to secure the nomination. He continues to evade reality.

Well, reality is about to catch up with him. And I'm leery of reaching out to his followers. I don't think they're going to vote in November and I don't think they were ever going to vote for a Democrat. They have the air of being too pure for realistic participation in modern American politics. They view themselves as customers and demand customer service. Why bother to kiss their ass when they're going to vote for whoever makes them feel good about themselves as opposed to the candidate who will do the best job for all of America?

The reason why Sanders polls "higher" than Donald Trump is because one of the three people still running for President right now has been given a relatively easy time of it. There are Sanders hit pieces out there, but they are dwarfed by the ones on Hillary Clinton and Donald Trump. Hillary has, since 1991, been dragged through the mud at every opportunity. She has been the victim of lies, slanders, and libels that are legendary for how deranged they are and how very often they get resurrected by our crap-sandwich media complex.

Donald Trump, on the other hand, is merely a crazy racist troll who personifies the evil heart of the Republican Party. Pee Wee Herman would look good in comparison, too. As would Che Guevara and the guy who had a sad and decided not to run. Boo hoo.

So, no, Bernie Sanders--your argument is a mere hypothetical. After three months of relentless negative advertising, your poll numbers would plummet and people would not automatically choose you over Donald Trump. You would not win the undecided slice of the electorate in key states because, ahem, you had your ass handed to you in those key states when Hillary beat you like a drum.

I really, really want this to be my last piece on Bernie because I'm tired of this fight. It's the wrong fight at the wrong time. The fight is with Donald Trump and the Republicans who support him without regard for decency or their own soul. The fight has to change dynamics after today and this tired old idea of what a hypothetical matchup means doesn't hold water. Polling right now is really about name recognition, and Sanders is a relative unknown at this point. A year ago, I would have called him an honest and decent man but he has done too much damage to the Democratic Party (and not enough damage to the Republican Party) for me to be on the fence about his motives.

We know why Sanders says what he says and remains in the race. He's in it for the money