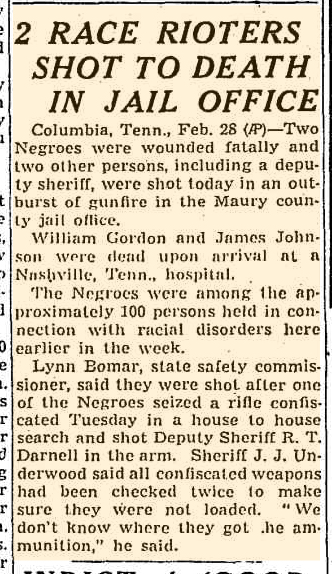 This horrific story, from the March 1, 1946 edition of the Chicago Tribune, highlights for me an important aspect of the Second Amendment--it used to be applied differently to people based on their race, even though the question of citizenship had been settled a good 80 years before this tragedy in Tennessee.

The very idea that there was a "house to house" search designed to confiscate weapons indicates to me that this whole right to bear arms thing has never been as sacred as some would make it out to be. I don't know how you could read that story and not wonder why this point isn't made more often--the right to bear arms is a matter of white privilege and it always has been. Dead in police custody. Does that ring any bells?

The newspaper article above is the imperfect, immediate account of what happened. Here's the exact same incident in historical context:

The Highway Patrol marched into the black area of town and began searching businesses and homes. By the time they were finished, homes were ransacked, and merchandise was scattered over businesses’ floors. More than 100 blacks were arrested. The guard, by contrast, stopped a group of armed whites from entering the black section of town.

During the night of February 28, two of the black prisoners were killed by Columbia policemen. The policemen claimed the two men had grabbed guns from the white officers and started shooting. The policemen said they had fired back in self-defense, killing two and wounding a third.

Twenty five blacks were tried on the charges of shooting the white policemen. The all-white jury, in a surprise verdict, found only two of the men guilty. Charges against these two were later dropped. Of the other black men charged in the riot, only one was found guilty. The mother and son whose radio started the riot were never tried. No whites were ever charged.

The jail deaths were investigated by a federal grand jury which ruled that it was “justifiable homicide.” The Columbia riots, along with other acts of violence against blacks, received nationwide publicity. In response to pressure from the NAACP and others, President Harry Truman created the President’s Committee on Civil Rights.

Where have we heard the term "justifiable homicide" before? Two men, shot down by police, and no accountability, nothing. This reminds me of how Freddie Gray somehow died after being handled by six different police officers, some of whom have gone to trial and have been found not guilty...