The Sanders Campaign Has no Ground Game 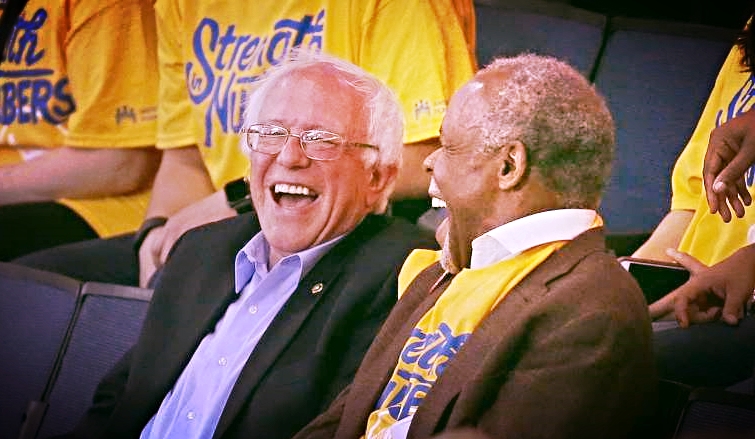 There's a lot of spin today about what happened in Puerto Rico:

The presidential primary in Puerto Rico is today, but concerns about election fraud have been growing for days already. Bernie Sanders campaign officials and supporters are worried that a series of problems, ranging from drastically reduced polling stations to poll workers who can’t get certified, might be signs of voter suppression or election fraud. Some of these problems wouldn’t just hurt Sanders supporters, but could reduce everyone’s access to voting during the primary. What exactly is happening? And is it some form of fraud or voter suppression, or just a series of poor management decisions?

Here’s what you need to know.

In a decision that is disturbingly reminiscent of problems seen in Arizona, polling locations in Puerto Rico were reduced from 1,510 to 432. On May 5, the Democratic Party announced there would be 1,510 polling places, according to Caribbean Business. The drastically reduced number was announced on May 27, with the remaining locations being open only for local voting and not the presidential primary. You can read a discussion about the whole thing on this Reddit thread.

In contrast, according to a press release by Grassroots for Bernie volunteers, the 2008 Democratic primary in Puerto Rico had 2,306 polling places serving 384,758 voters. There will only be 432 for the 2016 primary.

This is especially a problem because polling hours are only from 8 a.m. to 3 p.m. local time. This could lead to long lines or some voters even being turned away, like they were in Arizona. This ended up happening. Some locations reported long lines and even some people passing out from standing in line in the heat for so long.

Sounds like voter suppression, right? Well, it's not that simple:

MSNBC National Reporter Tony Dokoupil announced on-air that the reason the polling stations had been cut so dramatically, by two-thirds, from 1510 to 432, was because the Bernie Sanders campaign did not have enough volunteers to monitor polling stations. 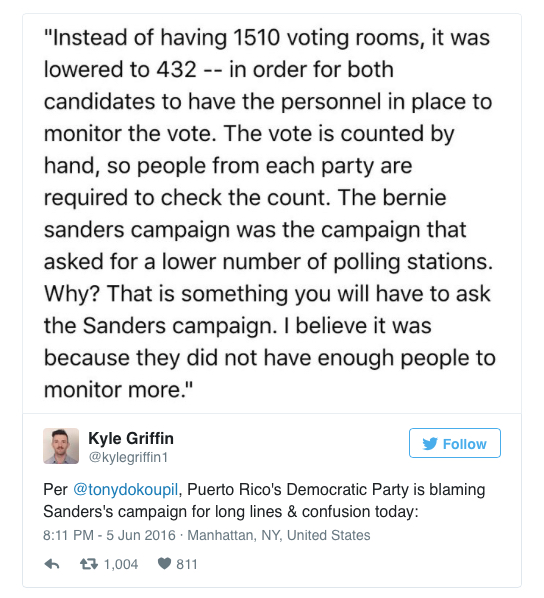 So, just to recap the strategy being put into action here:

1. The Sanders campaign is broke and does not want to commit resources to the Puerto Rico primary.

2. Polling places have to be reduced because the Sanders campaign cannot supply enough volunteers (and, this could be deliberate because if the Democratic Party in PR tried to run ALL of the polling places without Sanders volunteers, it would throw the race into chaos because of claims of fraud).

4. The Sanders campaign issues statements that says that they never agreed to the reduction in polling places, but does not deny the fact that they didn't have the resources to staff those polling places.

5. Everything's a fraud, Hillary is losing, time to blow up the Democratic Party.

Sounds like another Monday to me. And don't believe any of the pushback--Sanders himself had to answer the concerns of his own supporters over not providing them enough resources.

If you want to convince people that you can run for president, know the rules of the primary and supply some sort of ground game in order to get out the vote. Otherwise, exit the race for the good of the party. Unless, of course, it's all about fundraising and not about stopping Donald Trump.