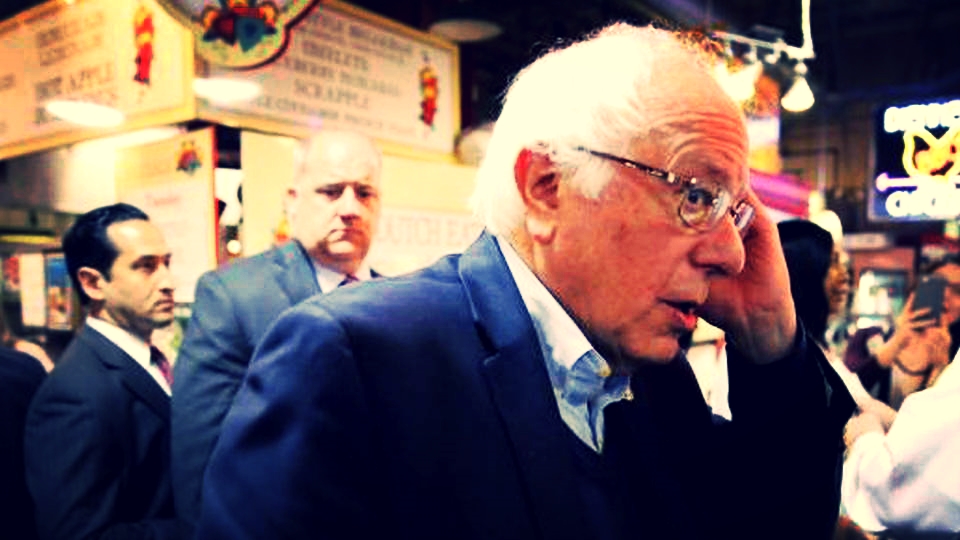 Sanders resisted the plea of "Jeff for Justice," a 35-year-old activist who sneaked into the conference room and suggested that Sanders should abandon the Democratic Party to run as an independent.  (The man would not share his legal name with reporters but did reveal his age.)

"Aren't you selling out to the two-party system?" the man asked Sanders.

The man soon spoke up again about Sanders "selling out." Sanders's smile disappeared as his aides looked on.

"Excuse me! Excuse me!" Sanders bellowed as the man mumbled. "I'm going to ask you to leave if you interrupt again."

The man did not interrupt again. And Sanders left minutes later, still a Democrat but far from enthused.

He called Sanders out on his rhetoric and got exactly the truth--there won't be a third party run because winning is not the objective. Destroying Hillary Clinton is the true objective. Sanders wants to sell out and destroy as much of the Democratic Party as he can so that the Republican Party can win in November. There's no other reason to make the public statement that the Democratic National Convention will be contested BEFORE the results are in from New Jersey and California. There's no other reason to tell everyone that the delegate count is "fluid." For someone to have the truth spoken so clearly to him, Sanders is somewhat blasé in his response. No wonder he fled the room. He does not want to admit that being an out-of-power gadfly makes it easier to criticize others and raise money. That's preferable to having to show up and actually lead and make decisions.

Bernie Sanders puts the race for the president in jeopardy by questioning the legitimacy of the process for picking a nominee. His campaign has used every trick it can come up with to deny the obvious fact that a majority of Democrats want to get behind Hillary Clinton and win this November. It is unacceptable (and un-democratic) for him to keep ignoring the fact that he lost the race weeks ago. He cannot keep trying to game the system to try and deny Hillary's victory. His campaign is broke and hers is trying to pivot to face the onslaught that is coming from Donald Trump.

Sanders won't allow that because, to do so, signals to whoever is left to give him money that they are wasting their resources on him. By becoming an irrational actor, he sets himself up to be the de facto leader of whatever will be left of President Obama's coalition. And this may not mean that Trump wins in November--Hillary has a huge demographic advantage. It does mean that Bernie Sanders is going to try and wreck the Democratic Party and follow through on his promises. When a man tells you he's going to burn down your house, quit waiting around for him to come to his senses.

For weeks, people have been on the fence about Sanders' stated intentions to disrupt and demolish party unity. There has been a general consensus that Sanders will "wake up" and leave the race with some dignity. Hell no. He's in it not to win it but to blow it for the Democratic Party. He has a Don Quixote complex. If the Democratic Party won't give the nomination to him, he will use whatever influence and resources he has left to tear the party down in broad daylight so that no one can stop Donald Trump. If this was the plan all along, don't forget--Bernie Sanders has been telling you where he stands from day one.

Sanders is nipping at Clinton in the polls, for now—but anybody who wants to, like Clinton, her campaign or its associated machinery, can fill fat files with quotes from Sanders in which he denigrates the Democratic Party whose mantle of legitimacy gives him a stature that unaffiliated candidates rarely enjoy.

“Clearly, it’s something he should answer for,” Democratic former Congressman Barney Frank said.

In an interview with Politico on the Senate subway, Sanders didn’t walk away from his criticism of Democrats—although he insisted he has developed over his long career a strong relationship with the party in Vermont, in Washington and the nation. Asked whether he still believed the party is “ideologically bankrupt,” Sanders answered by not answering the question.

“I think what we have today is, I think, a Republican Party which has moved from a center-right party over the last decades to a right-wing extremist party,” he said, the subway whooshing him from the Capitol to his office. “I think you have a Democratic Party which is not as strong as it should be in standing up for the working class of this country and taking on big-money interests. And that’s been my view for a long time.”


Well, fence sitters. Look what Bernie has planned for you this summer.