The Hubris Behind the Make America White Again Billboard 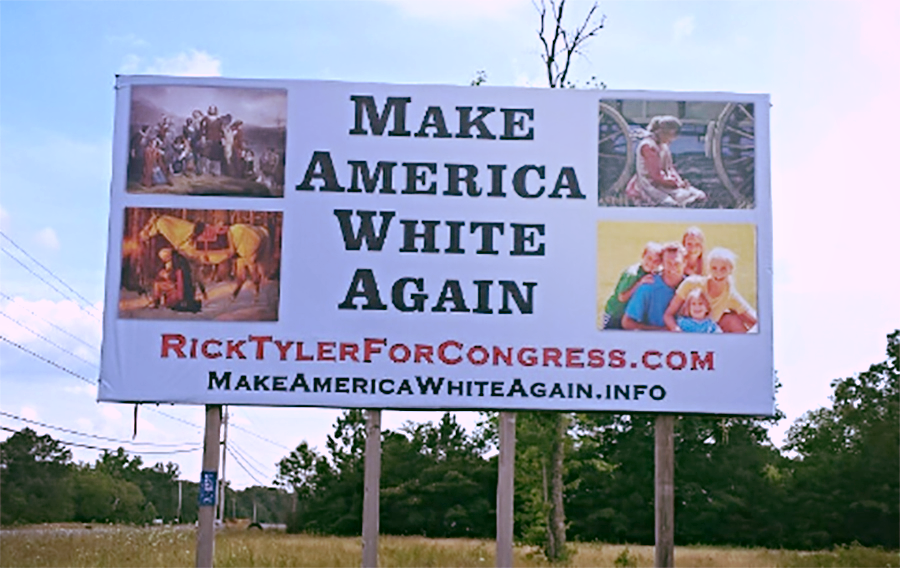 Oh, it's racist all right. And the thinking behind it is straight out of Donald Trump's playbook:

"With its towering and massive stature, the billboard sign is difficult to ignore and its message comes across as authoritative and influential."

"For these reasons we are confident that a widespread and creative billboard advertising game plan could go a long way toward making the Rick Tyler For Congress candidacy both viable and a force to be reckoned with. Clearly we are in uncharted waters, in that there has never been a candidacy like this in modern political history. Of great significance, as well, is the reality of the Trump phenomenon and the manner in which he has loosened up the overall spectrum of political discourse."

"The Make America White Again billboard advertisement will cut to the very core and marrow of what plagues us as a nation. As Anne Coulter so effectively elucidates in her book, Adios America, the overhaul of America's immigration law in the 1960's has placed us on an inevitable course of demise and destruction. Yes the cunning globalist/Marxist social engineers have succeeded in destroying that great bulwark against statist tyranny the white American super majority. Without its expedited restoration little hope remains for the nation as a whole."

The man responsible for this white supremacy is Rick Tyler, and he rejected the phrase "mamas, don't let your babies grow up to be miscegenators." I suppose I have to post this now.

Anyway, this asshole identifies as an independent, thereby associating the independent political movement with racism and segregation forever. No, strike that last part. This guy is so racist and mentally ill, he declined to run as a Republican (even though he thinks Trump is right on the money).

Each and every time a public official was allowed to question President Obama's faith or his place of birth or his patriotism without consequence helped this guy make up his mind to run for office based on being a racist jackass. Each and every time a politician was allowed to get away with praying for the president's days to be few, they gave this guy the green light to put up that billboard. It's 2016 and we have mainstreamed the notion that you can hate the President of the United States for being a black man. Fuck these God-awful people right in the earhole.