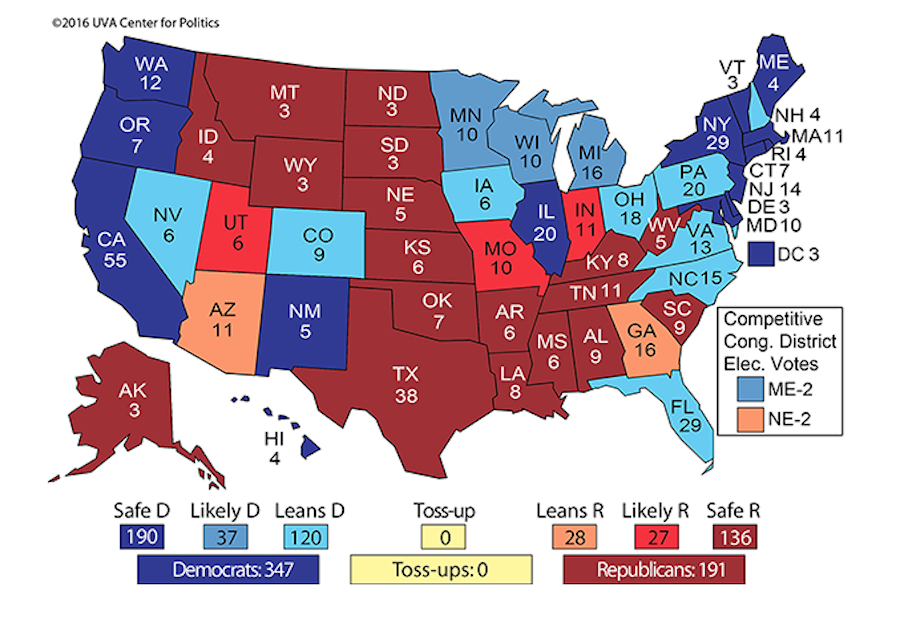 Here's a handy look at the Electoral College, as prepared by Larry Sabato at the University of Virginia Center for Politics.

I mean, it looks like a blowout to me. President Obama's coalition is alive and well and it supports Hillary. There are solid state organizations all throughout the Clinton campaign--robust, well-organized campaigns that know how to get out the vote and compete in every Congressional district. The Trump campaign has no such organization--no infrastructure, nothing. This is the wake-up call that Republicans aren't answering. Trump has wasted the last six months running his mouth instead of seeding the competitive states with volunteers and staffers. I mean, Hillary has been building her campaign for what seems forever. Trump has been funneling campaign money to his failing businesses. That should tell you something.

There are a few Hillary-curious states out there but, by and large, the Electoral College map has not shifted over the last few months. Mitt Romney eked out 206 Electoral Votes and it doesn't appear to me that Trump is going to beat that, not by a long shot.

I really think that Kentucky and Louisiana can be stripped away from the Republicans. Why? Obamacare! One state is ratfucking it (KY) and another state is embracing it (LA). If the case can be made that real, honest help is on the way, those citizens could revolt against their state governments and vote Democratic. Kansas, we're all looking at you, too.

In any event, this amounts to a Clinton landslide. People do not stay stupid forever.