Some Thoughts About the AR-15 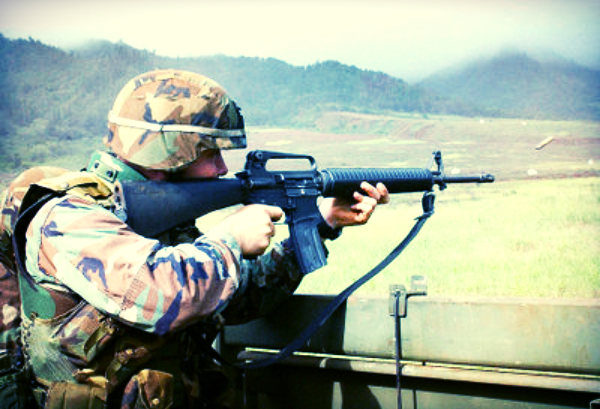 There are a lot of articles going around about the weapon used in the Orlando shooting. Despite what you may have heard, it was not an AR-15. It was a version of that rifle, but the differences are essentially meaningless. For gun nuts, oh, this was HUGE. For everyone else, an assault rifle is an assault rifle. There are going to be numerous pieces that will talk about what this weapon does and how it works. I'm not going to add anything other than what I know from having used one while in the Army.

The AR-15 is the civilian version of the M16A2 rifle, which I spent about seven years with. Everything I write about here is centered around the M16A2. I was not one of those soldiers who spent days and days qualifying on the rifle. I fired Sharpshooter (which is in the middle) on it virtually every single time. I never failed to qualify at that level, hitting over thirty our of forty targets. And I was a terrible, terrible soldier. But I did earn two Good Conduct Medals while being morose, moody, and difficult. That is my sole contribution to America's defense.

At basic training, there was a lot of emphasis on zeroing the weapon, which means that the front and rear sights are changed to accommodate the shooter using a series of tests on the firing range. After basic training, I never zeroed the weapon again because I adjusted to mechanical zero and just did what I had to do. It is very, very easy to shoot this rifle and to hit what you want to hit. You do not have to zero this weapon to be effective with it. You just need to breathe and pull the trigger calmly.

For about three years of my time in the Army, I had an assigned rifle, but it was kept in the battalion arms room. The strictest gun control in the world can be found on any Army base. No one was allowed to keep their personally owned weapon in their barracks room. If you had a weapon, you were required to keep it in the arms room. You had to get a letter from the Company Commander to take your weapon out of the arms room. And then, it was like carrying around a hot potato. If you lost your Army-issued weapon, it was a major incident (hands across Fort Bragg meant just that--they joined hands and walked across Fort Bragg looking for a lost weapon, which never happened to me but serves as the apocryphal story of what happens when someone does). You also did not want to lose your protective mask. I don't know what a gas mask, a dog tag, or a gun look like, but I have carried a protective mask, a pair of identification tags, and a rifle.

We took the weapon into the field and we took it with us into the gas chamber (don't ask me why it was called a gas chamber instead of a protective chamber). We used it for certain training events. Otherwise, you never saw the damned thing. For about four years, I "shared" a rifle, which meant that, when it was time to go qualify, I used the one that was handed to me. I was stationed in South Korea for a year. The rifle I was assigned during that time did not have an ejector spring, which meant that, if the balloon had gone up, I would have one shot and then the weapon would jam. Yay! But don't worry, everyone said, because the KATUSA's would be throwing down perfectly good rifles left and right for me to choose from.

We always used thirty round magazines. I don't know what a clip is, but a magazine for this weapon will hold thirty rounds. It's not heavy, and it comes with a sling. More often than not, I carried this weapon with it slung across my back with the barrel pointed downwards, often with 100 mile an hour tape over the magazine port. You have to keep this weapon very, very clean otherwise it will jam. The safety was always on, except when firing at the range. There was never a magazine in the weapon, ever, unless we were on the range. And when you were on the firing range, you observed the strictest safety protocols.

I watched a female private point her rifle at a Drill Sergeant on Fort Leonard Wood, Missouri once. This was on the qualifying range. He instinctively reached out, pushed her rifle out of his chest, and it went off. That is as close to hearing a shot fired in anger as I ever got in 7 years.

Gender has no bearing on being successful with the weapon. The soldiers who did very well on the qualifying range were often the ones who had never fired a rifle before. The ones who did the worst were country boys who knew everything about shooting and would often remark that this dang gun didn't shoot good. Women were as good as men with the M16A2 and often deadlier.

I cannot emphasize this enough--the weapon does not kick. It rests in your arms and, after you charge it, you can shoot at targets, one after the other, and it is a very simple process. I always wore hearing protection. You should not go near a rifle without some sort of ear plugs. The Army that I am familiar with had us wearing our earplug case on our BDUs at all times.

I have no idea what this guy is talking about. Did they give him a 12 gauge shotgun instead of an AR-15? The weapon has no kick to it. I'm confused. Did they start making one that does? Idiots.

At basic training, we were issued tracer rounds. This was so that we could conduct a night fire exercise. This was the only time I ever had to shoot at night. And I will close with this, because I think this is very relevant. The round that is fired from this weapon is a high velocity round. It's unlike anything you've ever seen. We were firing our tracer rounds down range at targets 50, 100, 200, and 300 yards away (other distances, too, but 300 yards was the max). I watched these rounds hit the berms where the pop-up targets were positioned and they would just fly up into the air. This meant that, when the round hit something, it would tumble and go off in all directions. There is no safe way to shoot a weapon like this because it is designed to destroy human flesh. When these rounds were fired at people, according to one Drill Instructor, they would enter the body and begin tumbling. A human being would have an entry wound in the front and then the NATO round would open the other side of their body up like a suitcase.

These weapons are very deadly and very dangerous. I don't know why anyone would want to own one. The damned thing isn't safe.