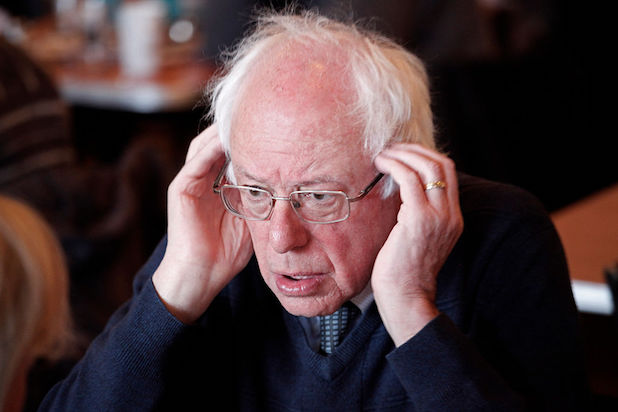 I don't believe that Bernie Sanders is especially worried about a Trump Presidency:

Bernie Sanders took a swipe at Hillary Clinton’s foreign policy credentials on Thursday in the wake of her speech attacking Donald Trump’s proposals.

"I agree with Secretary Clinton that Donald Trump's foreign policy ideas are incredibly reckless and irresponsible,” Sanders said in a statement. “But when it comes to foreign policy, we cannot forget that Secretary Clinton voted for the war in Iraq, the worst foreign policy blunder in modern American history, and that she has been a proponent of regime change, as in Libya, without thinking through the consequences.”

That was more than a swipe. That was a full-throated attack on her credentials. And it's dishonest as hell given the fact that Hillary has gone to extraordinary lengths to be candid and answer for her vote:

After days of Republican presidential candidates wrestling with questions on the Iraq war, Hillary Clinton weighed in Tuesday, telling reporters that her vote in favor of the war in 2002 was a “mistake.”

“I made it very clear that I made a mistake, plain and simple. And I have written about it in my book, I have talked about it in the past,” Clinton told reporters at an event in Cedar Falls, Iowa, adding that “what we now see is a very different and very dangerous situation.”

Hillary said that on the campaign trail a year ago. She put it in her book, and she has taken full responsibility for what happened, demonstrating a level of candor you won't see out of Bernie Sanders because he won't take responsibility for voting against the Brady Bill because that's not how he does things. He won't talk about Sierra Blanca and the fact that he's still making money from a scheme that dumped nuclear waste in an economically disadvantaged area.

The thing that makes it easy to understand why Sanders would make such an attack on Hillary is his own refusal to count the delegates and see that he has no path to the nomination. The only thing he can do is join forces with Donald Trump and marginalize her as a candidate and undercut her public speeches with his own attacks on her judgment and character.

The Sanders campaign knew this address was coming. They waited for her to take the spotlight and then they went with the most damaging rhetoric they could come up with. Sanders has launched that disingenuous broadside against her record numerous times--why attack her in the critical hours after her speech? He wanted attention and he wanted to steal her thunder because she's the only person who's been able to land any punches on Trump. When Sanders takes aim against Clinton, it's not on behalf of the idea of winning. It's a spoiler move, designed to keep her negatives high and remind people of issues that were dealt with long ago. He helped Trump denigrate her foreign policy credentials, which is something neither one of them have.

His attack was not designed to change the minds of 107% of the remaining Democratic primary voters--it was designed to help Trump by reminding voters about the one negative thing she has taken responsibility for. He can talk all he wants about not wanting Trump to win, but his actions speak to a different plan. He is no longer engaged in the fight to win over people to his side of the argument. He is now actively engaged in burning down the whole house no matter who's inside. A Trump win in November means he and his followers can spend the next four years fundraising off the tenuous claim that they were "right" all along and tried to "save" the Democratic Party. That's the perfect way to avoid being held accountable for anything.