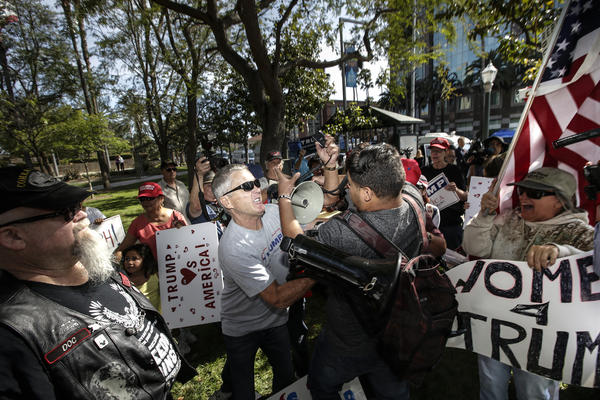 Michael Tomasky writes about a curiously American preference for what looks to me like hippie punching:

In the modem-day American context, it’s not in the interest of the powerless to initiate violence. They’ll always get screwed. Always. They’ll always be blamed by the media, called “rabble-rousers” and “trouble-makers,” and the worst of the footage, like those people throwing eggs at that woman in the Trump football jersey in San Jose, will be shown over and over and over again, giving my regular middle Americans up above reason to think the violence was 50 times worse than it actually was.

And those regular middle Americans will say to each other: “Goodness, Jean, those protestors are just awful, aren’t they?”

“That’s not the American way!”

And it will go on from there, and that night after dinner, they’ll flip on CNN (because these are not Fox viewers—an important point) and they’ll see more footage and they’ll see interviews with Trump supporters who were standing there more or less minding their own business and suddenly got their faces punched in, and they’ll work themselves into a reactionary state and decide that maybe a vindictive boor is precisely what those people need.

The way I see this working is that the Trump campaign is going to hold rallies in places where they know there will be protests and violence. Trump will be able to point to the people who perpetrate this violence and make himself a "law and order" candidate. He will then ask, "why doesn't Hillary Clinton denounce these violent protesters?" She of course, has denounced the use of violence, but it won't matter because the narrative on the news will show just that sequence of events.

1. Trump shows up to give his speech

2. Protesters appear and get into it with his own violent, racist followers

3. Wild mob scenes appear all over the Internet and on television

4. The media cuts to Hillary saying, "I denounce this."

5. Bang--your hippies get punched without so much as a second look.

This all puts Hillary in a position where she has to denounce otherwise peaceful protesters who are going to be goaded into doing something illegal or violent that will appear on television. You can see it happening right here--Trump supporters are using pepper spray to create violence and a mob scene. In Trump's twisted vision of America, this is a great strategy--make the entire left look like a raging, Mexican-flag waving mob rolling on the ground with "patriots." The media will eat this up--it'll be the sequel to Ferguson and Baltimore, two events which supercharged their ratings.

The only demographic Trump has right now are old, white men whose wives will vote with them against Hillary. The way to whip them up and get out the vote is to punch as many hippies as possible and hope the cameras are in the right place.