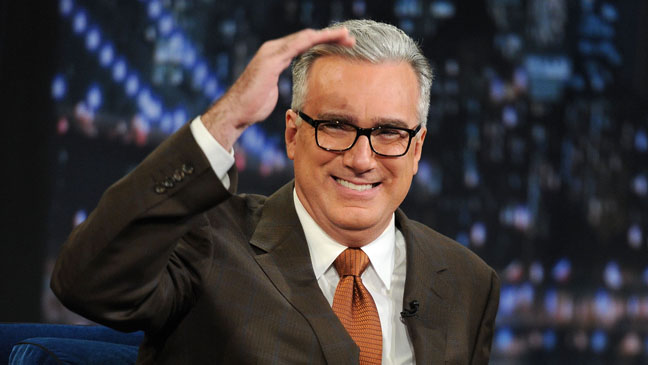 Even though you can't convince me that Keith is ever going to be able to hold a job, I still miss his commentary and I miss the perspective he brings to American political discourse:

If all the belching and bellowing voices in that marketplace are in ideological disagreement about Trump or any other candidate real or fantastic, ranging from Hillary Clinton to St. Francis of Assisi, we're fine. It's unintentional but entirely suitable that the phrase "polite political discourse" includes a homophone for the word "coarse." But if these Crank-It-to-11 competitors all find themselves in agreement that Trump, and the coverage of Trump, and the blowback to Trump, and the advertising dollars spent on the coverage of the blowback to Trump, constitute a cash explosion in a dying journalistic ecosystem whose healthiest part had been broadcast and cable news until recently there came a plague of locusts called cord-cutters — then we've got trouble.

Because now you can ask any question about Trump, Trumpism or anti-Trumpism except the existential ones, because the existential ones could lead him to stop calling in to your morning show and providing you with your highest-rated hour for free. You can't go meta on the perfect storm that has thrust up this Howard Beale of presidential candidates. You can't say, "Never mind the politics, what kind of man could boast on national television that he'd just raised $6 million for veterans' groups, then deny he'd ever said 6, then when told his boast is on tape demand that you play it for him, then make it impossible for you to play it for him?"

If he is scheduled to do 20 Trump town halls for you between now and the election, thus saving you about a month's worth of production costs for your average cable news show (a million or two, depending on how much you pay your meat puppet), you don't examine what's going on inside of a man who could first pretend to be his own media spokesman, then boast about his own sexual conquests in the third person, then admit the deception to a reporter, then again admit it on the legal record, then deny it on national television, then when pressed about it byThe Washington Post simply hang up the phone.

I miss him because he's right. The American media complex is completely and utterly in bed with Donald Trump. They may loathe his politics, but he is feeding them far too much revenue right now for any of them to risk being "cut off" from access. If Trump were to make good on a threat to ban one of the major networks, their news division would take the blame from their corporate leadership for costing the overall network millions in ad revenue.

This is why it's okay to demonize Hillary Clinton--she doesn't bring them buckets full of cash and clicks and ratings points. She merely brings substance and actual ideas and experience. In America today, none of that's worth a damned thing when you're chasing the last dollar blowing through town.