Hillary Stays on the Attack 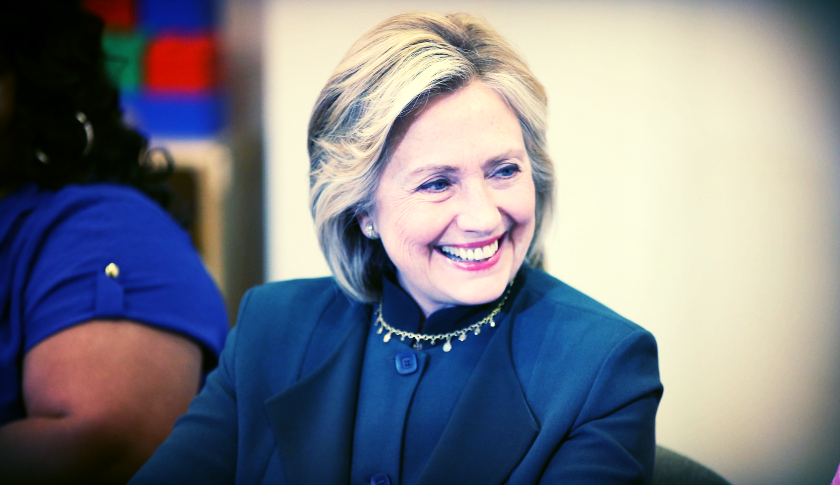 It's easy to take Hillary Clinton's attacks on Donald Trump for granted. She has maintained a consistent anti-Trump message since winning the California primary and she has leveled some devastating blows at the very idea of a Trump presidency. Today, she stays on message and really goes at Trump for his bizarre Scottish news conference:

Declaring the aftermath of Brexit a "time of uncertainty," Hillary Clinton on Friday said the United Kingdom's decision to exit the European Union raises the stakes for the November election against Donald Trump as her campaign's top advisers laced into the Republican as unfit to handle the weight of the moment.

"This time of uncertainty only underscores the need for calm, steady, experienced leadership in the White House to protect Americans' pocketbooks and livelihoods, to support our friends and allies, to stand up to our adversaries, and to defend our interests," the presumptive Democratic nominee said in a statement. "It also underscores the need for us to pull together to solve our challenges as a country, not tear each other down."

Clinton foreign policy adviser Jake Sullivan told reporters in a conference call that the presumptive Republican nominee "proves again and again that he is temperamentally unfit for the job." On the same day, Trump devoted a significant portion of a news conference in Scotland to discussing his renovated Turnberry golf course."The American people need a steady hand at times of uncertainty, not a reckless egomaniac," Sullivan said.

"Donald Trump actively rooted for this outcome and the economic turmoil in its wake," Sullivan said of the Brexit vote, adding that from Clinton's perspective, it really matters who's actually sitting in the Oval Office."

This is the kind of consistent messaging that will help Hillary solidify the Democratic Party's natural base (yeah, a lot of people need to come around and face reality) and it has been very effective, but relatively under-reported in the mainstream media. They get way to much of a revenue bump when they put Trump on the stage and they are praying for a horse race. There is such an inherent conflict of interest at work here. The media is afraid to upset Donald Trump so they go out of their way to be fair (and Trump ends up banning them anyway).

Right now, we don't need fair. We need them to report on the fact that Trump is dangerous for the future of America. Molly Ball doesn't think Hillary has closed the deal with the voters yet:

Rather than being over before it began, then, the election is at an extraordinarily volatile and uncertain point. Clinton has helped turn voters against Trump, but she hasn’t convinced them to support her. If Trump wishes to exploit this situation, he faces two tasks: First, he must convince voters that, as much as they dislike him, they ought to find Clinton at least as unpalatable. And second, he has to convince them that if they put him in the White House, they will not have bequeathed the nation’s highest office to an unstable madman with no self-control. He has to be cool, and he has to sustain it long enough to be convincing.

As many times as Trump has already failed to live up to that standard, those inside his orbit insist this new turn is for real. The dismissal of Lewandowski is seen as a crucial move, one that demonstrated that Trump is committed enough to the campaign’s mission to sacrifice a key enabler and confidant. So pervasive and toxic was Lewandowski’s influence that his departure unlocks enormous opportunities for the campaign, insiders say. And unlike past efforts to change Trump’s trajectory simply by putting new words in his mouth, his campaign is now actually engaged in a serious of major operational changes to address its profound deficiencies.

Given that it is still June, I agree with this. There's an attention deficit right now--voters are done with the primary and won't begin to really engage until September. I don't think Lewandowski really mattered, though. He was a flunky who lost an internal fight with Trump's kids. No one controls Trump and no one knows what he's going to do next. Hillary's message is, "this guy is too dangerous to be president" and I think more and more people are waking up and paying attention.

Hillary's consistent messaging is helping her maintain a strong lead right now. Hundreds of millions of dollars in Republican PACmoney is going to be unleashed against her this summer. We haven't even started to see the worst of what they will throw at her. The one thing that all of that money can't do is make Trump an acceptable alternative.