Hillary Can Win Without Their Support 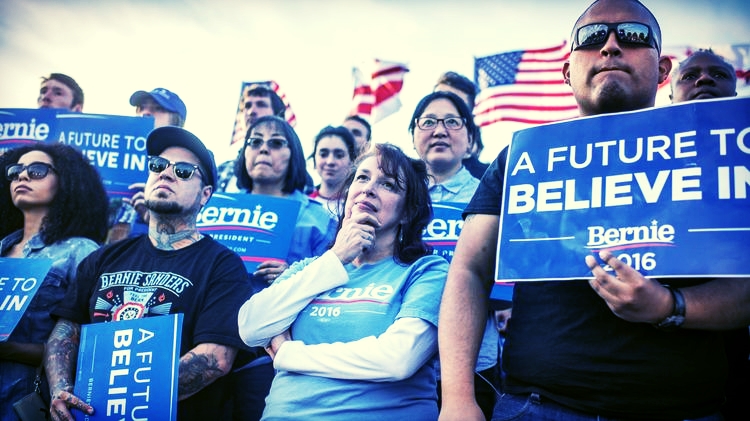 Don't yell at me for writing about this, but Bloomberg is out with a report today that says that almost half of the people who supported Bernie Sanders are not going to vote for Hillary Clinton:

In the two weeks since Hillary Clinton wrapped up the Democratic presidential primary, runner-up Bernie Sanders has promised to work hard to defeat Donald Trump — but he’s given no sign he’ll soon embrace Clinton, his party’s presumptive nominee. Neither have many of Sanders’s supporters. A June 14th Bloomberg Politics national poll of likely voters in November’s election found that barely half of those who favored Sanders — 55 percent — plan to vote for Clinton. Instead, 22 percent say they’ll vote for Trump, while 18 percent favor Libertarian Gary Johnson. “I’m a registered Democrat, but I cannot bring myself to vote for another establishment politician like Hillary,” says Laura Armes, a 43-year-old homemaker from Beeville, Texas, who participated in the Bloomberg poll and plans to vote for Trump. “I don’t agree with a lot of what Trump says. But he won’t owe anybody. What you see is what you get.”

Conversations with two dozen Sanders supporters revealed a lingering distrust of Clinton as too establishment-friendly, hawkish or untrustworthy. As some Sanders fans see it, the primary was not a simple preference for purity over pragmatism, but a moral choice between an honest figure and someone whom they consider fundamentally corrupted by the ways of Washington. Sanders has fed these perceptions throughout his campaign, which is one reason he's having a hard time coming around to an endorsement.

Voters like Armes, who says she’ll “definitely” vote in November, highlight the difficulty Clinton faces in unifying her party. Clinton’s paltry support among Sanders voters could still grow, as his disheartened fans process the hard-fought primary campaign. But the Bloomberg poll found that only 5 percent of Sanders supporters who don’t currently back Clinton would consider doing so in the future.

Eric Brooks, 52, a community organizer in San Francisco, won’t be among them. “I will absolutely never vote for Clinton,” says Brooks, a Sanders supporter who participated in the Bloomberg poll. Although Brooks indicated in the poll that he’ll support Johnson, that is not his intention. “I’d be okay voting for Johnson as a protest vote,” says Brooks. “But as a Green Party member, I’m going to vote for [Green Party candidate] Jill Stein. If you care about the climate, like I do, it makes a lot of sense strategically to vote for Stein, because she could get five percent, which has implications for the Green Party getting federal funding.”

Now, I know that the typical reaction is going to be, "so what!?!" and "get out of here with this bullshit!" and "why didn't you think about how this affects me before you posted it?" I get that.

I also want to note that the story is problematic because it is way too early to predict how many Sanders supporters are going to change their minds between now and November. We're a long way from Election Day. We haven't even had the conventions or the debates, and they will move the polls considerably once their impact is felt by the electorate. If the GOP Convention blows up, the conventional wisdom could swing around to Hillary and bring a lot of vehemently opposed voters onto her side (no one likes to look foolish or back a loser). The sensible ones will come home to the Democratic Party. The rest were never going to vote Democratic.

Oh, and the Sanders people? They're not "likely" voters. A lot of them never voted and have no plans to vote. They support him but they haven't gotten that voting thing figured out. Their impact in states like New York, Pennsylvania, Florida, and Ohio is going to be minimal anyway. States that Hillary won going away are not going to be impacted too badly by the Sanders vote. And, besides--if Trump is the nominee, he has no organization in those states and no chance of beating Hillary.

Let them throw away their vote, if they even bother to vote at all.