Here's Another Chance to Avoid Talking About Guns 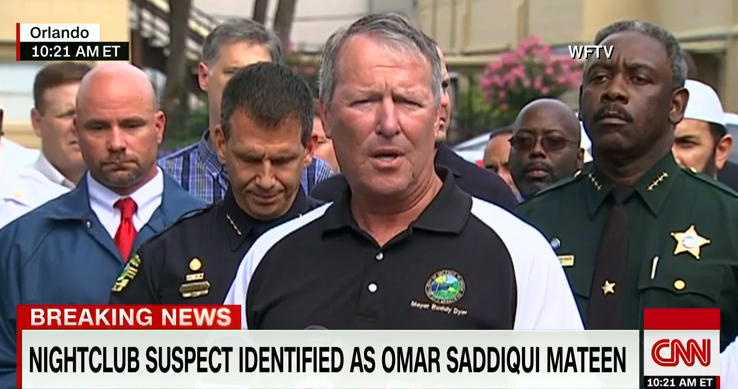 This is what we know as of Sunday at noon Eastern time:

A gay nightclub here was the scene early Sunday of the worst terror attack in U.S. history since 9/11.

* 50 people were killed inside the Pulse club and at least 53 people were injured, police say.

"It's appears he was organized and well-prepared," Orlando Police Chief John Mina said early Sunday. The shooter had an assault-type weapon, a handgun and "some type of (other) device on him."

You can be rest assured that this was the kind of hate crime that comes from a lack of tolerance and respect for human life and human dignity. You can be rest assured that the fact that the shooter was of Muslim heritage that we will hear all kinds of nifty theories, like how this was a "false flag" operation and a wake-up call for the idea that we need to stop Muslims from coming into this country.

What you won't see come out of this is any kind of serious discussion about the weapon used, which was the AR-15 assault rifle. You won't hear anyone talk about how this weapon was specifically designed to kill human beings and you won't hear anything substantive discussed about keeping that weapon out of the hands of people with mental issues. It was probably legally owned and acquired, but what does that mean in relation to Florida's local gun laws? Probably nothing, but, oh well. If killing elementary school kids won't move the discussion forward, nothing will.

We really need to shift the 2016 election into a discussion about what we're going to do about guns because this is an example of what can move the country to the left. Hillary Clinton needs to make it clear that she's not coming for people's guns--she's going to put public safety above all else. We beat up Bernie Sanders for his association with the gun lobby, but his heart was in the right place with regards to the assault weapons ban. And Donald Trump? Who the fuck cares? You're going to be waiting around for a long time if you expect enlightenment out of Trump.

We have another chance to ignore the problem and that will be easy because, in America, we automatically feel nothing for gays and lesbians who die, whether it is because of hate crimes or AIDS or anything like that. Today was a tragedy, but tomorrow more so because we're still not having the right discussion and we're still not in agreement as to what to do to stop this sort of thing from happening again. I look forward to a great speech from President Obama but I also know one thing--the resistance to regulating dangerous firearms will harden even further and social media will be filled with jokes about how the shooting of so many people is "a good start" because we have a lot of indecent, mentally ill ghouls in this country who cannot feel anything for anyone anymore. Some of whom, incidentally, are elected officials within the Republican Party, but, hey--let's not be shrill about it.

UPDATE: And, yeah, it is kind of a big deal when someone who pledges allegiance to ISIS can legally acquire an assault rifle while working and living in the United States.

Perhaps our obstructionist Congress can get going on something that would help stop this?

And, seriously, fuck Tucker Carlson. What a shit sandwich of a human being.