Corey Lewandowski is Looking For a New Job 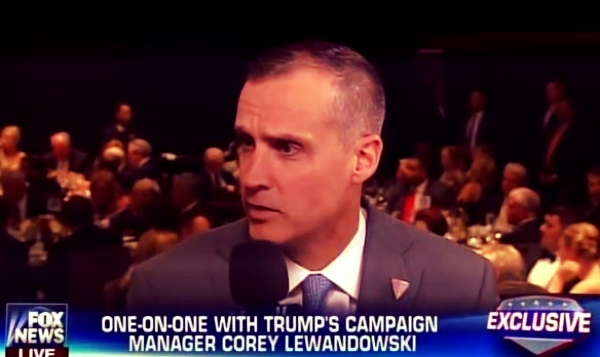 Oh, this is a sad development:

Donald J. Trump is parting ways with his campaign manager, Corey Lewandowski, a move that comes as the presumptive Republican nominee faces challenges as he moves toward the general election.

“The Donald J. Trump Campaign for President, which has set a historic record in the Republican primary having received almost 14 million votes, has today announced that Corey Lewandowski will no longer be working with the campaign,” the campaign spokeswoman, Hope Hicks, said in a statement. “The campaign is grateful to Corey for his hard work and dedication and we wish him the best in the future.”

Mr. Trump had faced increasing concerns from allies and donors, as well as his children, about the next phase of the campaign as he pivots toward a general election.

Two people briefed on the move said that Mr. Lewandowski was let go.

The campaign manager was seen as having a hostile relationship with many members of the national press corps that covers Mr. Trump, and many officials at the Republican National Committee had strained relationships with him.

This is sad because Lewandowski was doing serious damage to the Trump campaign on a day-to-day basis and I wanted that to continue for a few months. Clearly, no one thought of my needs before making this decision.

Someone in the GOP finally talked some sense into Donald Trump and now he is jettisoning the amateurs who helped him win the nomination. I hope he paid Lewandowski a lot of money to go away and keep quiet, otherwise we're looking at weeks of post-mortem think pieces where he's the real hero in all of this and whoever got him fired is just a craven, incompetent bootlicker.

UPDATE: Wow. Lewandowski has been cut loose without a non-disclosure agreement and no financial incentive to keep his mouth shut.

Trump must be broke. And Trump must be counting on being able to denigrate this guy in public and discredit him.