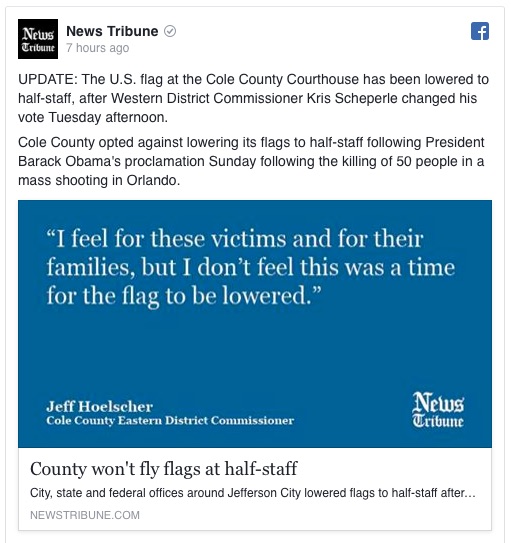 A bunch of assholes in Missouri decided they didn't want the trouble:

Cole County Western District Commissioner Kris Scheperle changed his vote Tuesday against lowering the flags at county offices in the wake of the Orlando mass shooting.

The flags were lowered during the 2 o'clock hour.

The move comes after the commission received many calls and social media messages against their decision.

"In spite of the fact that my vote was in accordance with Cole County's flag ordinance and federal law, I reconsider my original vote (position) due to the negative attention this has brought Cole County. The bottom line is my concerns for Cole County citizens," Scheperle said in a statement Tuesday afternoon.

Eastern District Commissioner Jeff Hoelscher said he stood by his decision to keep the flags up.

They didn't want to lower their flag because, well, the Kenyan usurper was simply trying to show favor to the gays and the muslims so, you know, whatever, man. Never mind the simple decency of doing what other Americans are doing--they want to be different and they don't want to be seen as being sympathetic to the gay hordes.

Apparently, they have a lot of time to sit around and think about things like when to raise the flag and lower the flag and tell the Federal government to fuck off in Cole County. So much free time, in fact, that maybe someone should look into whether or not they're actually doing what they're supposed to do to take care of citizens and ensure that everyone's equal rights are protected. I mean, when you find this mentality out there in the sticks, you should probably see what other shenanigans they've been up to.