Closer to the Gutter Than the Stars 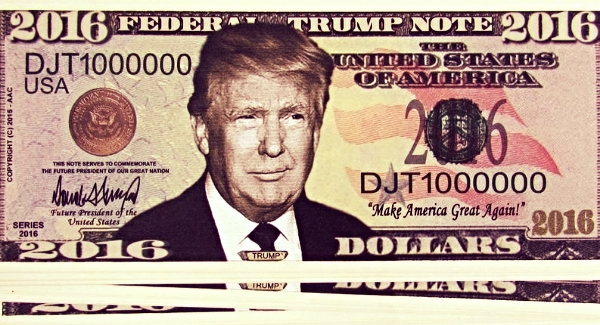 It would be a huge relief for Republicans if Donald Trump were honest and could tell the truth about his money situation. Now would be a great time to release his tax returns, speak openly and honestly about how much money he has, and release a plan to raise money for the general election.

That relief is not coming. Instead, Trump is going to spew bullshit, tell lies, and make the kinds of baseless accusations that only someone accustomed to being blown in public by the media could possibly utter:

The billionaire real estate mogul kicked off the month of June with just $1.3 million in his campaign account, a fraction of the $42 million Hillary Clinton had on hand. But that financial gulf between the two campaigns did not appear to worry Trump though during an appearance on Fox News’ “Fox and Friends” Tuesday morning.

Trump, as he boasted throughout his upstart run through the Republican primary, said he could easily infuse the campaign with his own money and continue his White House bid without the usual level of support from the GOP and its top donors.

"I can go a different route, I can just spend my own money," Trump said. "I have a lot of cash and I can do like I did with the other — just spend money on myself and go happily along, and I think I win that way. There are many people that think I do better that way, by being a little bit of the insurgent, the outsider and, you know, not working along."

It is hysterical to note that this is the man who convinced the GOP to give him the nomination due to the claim that he has been a great businessman for decades. This guy is closer to the gutter than the stars.  He won't release his tax returns and tell people who he does business with but he's quick to insinuate that the Clinton campaign is taking foreign money from whoever and whatever. Trump says that he has a lot of cash, but we've seen no evidence of this. We have seen evidence that Trump doesn't pay his bills and his campaign is so broke, it couldn't buy a condo in Manhattan.

This is the number one story of the day and Trump's only answer to it is to promise to spend money he doesn't have to fix a problem he doesn't understand. I tell you, it's a magical time to follow politics, simply magical.