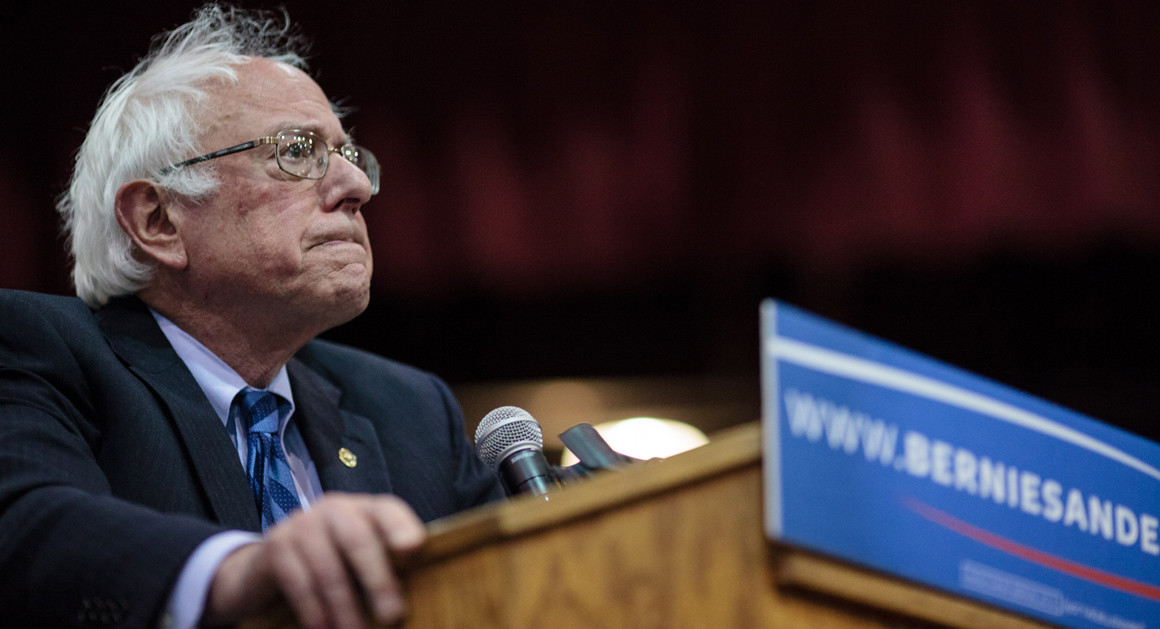 This is really, really strange:

You've described your path to victory now as "narrow." What does that long shot look like? How would it work?

Here's how it works. It works in three ways. Number one: For us to win the majority of pledged delegates, we're going to have to do very, very well in the remaining states. I think we have a shot – a real shot in California. We're putting a lot of our resources into that. New Jersey, we have a longer shot, but we can do it. So the path to victory is to do extremely well. You can do the arithmetic as well as I could. That's one path.

The third path to victory: making it clear to the superdelegates that their primary goal is to make sure we defeat Donald Trump. And that I am, in fact, the stronger candidate. And if they want to be risky – voting for Hillary Clinton, who could lose. I'm not saying she will. I'm not saying she can't defeat Trump. I think she absolutely can beat Trump. But I am the stronger candidate against Trump.

If you go by math, Sanders lost a long time ago. He really started losing when the superdelegates saw his temperment and his inability to manage his campaign up close. And now, it's June and the race isn't even close because, hello? it's over.

Even if he sweeps the remaining primary states (he won't), he still can't win because, even in a loss in California and New Jersey, Hillary still gets enough delegates to secure the nomination in a process that he called dumb. That's a great way to persuade superdelegates to flip their vote for him--call the system under which they operate dumb and make them feel bad for him. I don't know how that strategy will work with the Electoral College--I suspect it won't work at all and that people will just laugh at him.

The only logical thing that could happen in order to hand him the nomination is for hundreds of already-pledged superdelegates to suddenly have a come to Jesus moment and flip to his campaign. And even that has no logic behind it because the Sanders campaign has done nothing except piss off superdelegates and alienate itself from the Democratic Party.

It's as if Sanders can't even remember what they did to make superdelegates reject him in the first place. Back in April, this is what the Sanders campaign thought of them:

Superdelegates have been catching a lot of vituperation, says Rendell, a longtime supporter of both Bill and Hillary Clinton and former Democratic national chairman.

"'You're a scumbag, you're a tool of the capitalist system, a fascist,'" he said, citing insults lobbed by Sanders backers. "… It's not the campaign — it's some of his crazy supporters."

One Sanders follower sent an email saying "I know who you are" to Rick Bloomingdale, president of the state AFL-CIO and a Clinton supporter.

You're trying to woo us now, but we remember when you were trashing us.— Former Pennsylvania Gov. Ed Rendell, one of the state's 21 Democratic superdelegates, on the Sanders campaign's effort to win his support

"I asked the guy, 'Is that a threat, or what are you saying to me?'" said Bloomingdale, who noted that most of the emails he'd gotten from Sanders backers were polite.

It was wrong and dumb for Sanders supporters to make personal attacks on superdelegates, say both Longabaugh and Joshua Grossman, president of Progressive Kick, a super PAC lined up behind Sanders.

"It certainly wasn't us," Grossman said. "There are millions of people in the U.S. Not all of them are temperate human beings at all moments."

The Democratic Party put the superdelegate system in place starting in 1984 as a reaction to changes that had given voters a bigger say in choosing nominees. For party leaders, the final straw was the stormy primary season and convention of 1980 that many Democrats thought helped drag down President Carter's chances for reelection.

THAT was the tactical mistake that sealed the deal for Clinton. He should have stopped his supporters in their tracks but he let them have a pass. He's the guy who is now going to lecture people on how to run a campaign? No campaign can be held completely accountable for the crap pulled by fanatics but it's not like Sanders has a track record of condemning people quickly enough. He still has far less name recognition than Hillary, who has suffered months of negative attacks that have driven her poll numbers down. But, relax--she's got this because she still holds a commanding lead over both Sanders (delegates and votes cast) and Trump (Electoral College votes are all that matter, not national name recognition polls).

How could you be more of a hypocrite? He's driven the superdelegates away because of his own early choices, and this proves that he cannot run a better campaign. He's already lost but he thinks he can win if the people he's already pissed off change their minds and do something irrational and support him in massive numbers? Really? This is the best candidate? Someone who thinks he can win by "arguing" instead of getting people to actually vote for him?

But there you have it. His path is narrow, which is weaselspeak for "non-existent" and "highly unlikely."