A Change of Heart For Marco Rubio 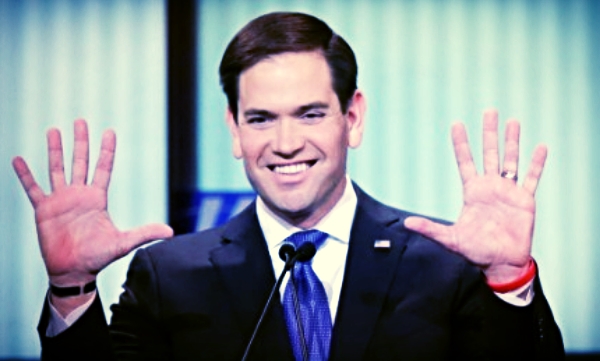 The people of the good state of Florida have to decide who they want to send to the United States Senate. Someone who wants to be there, serve their interests, and make the state proud.

Or this son of a bitch:

Signs are growing that Florida Sen. Marco Rubio is moving towards a run for reelection, a reversal of his past statements committing to retire from the Senate at the end of his term and denouncing the office as ineffective.

A major fundraiser for Rubio's presidential bid confirmed the senator and his advisers are instructing operatives and donors to begin laying the groundwork for a run — but emphasized Rubio hasn't made the final decision yet.

"I think it's making sure things are in place should he make the decision," the fundraiser said. "It's fair to say everything he says publicly is what he says privately, it's 'if I decide to do this.' "

In order to translate the weasel-speak, young Marco knows that Trump isn't going to win and he wants to be in a good position to run for president in 2020. He knows that Trump will be off the scene, he knows that vast numbers of Republicans hate Ted Cruz, and he knows that Jeb Bush probably won't have the stomach to ever run again. This clears the decks for him and he can probably find a few lonely, disaffected billionaires to keep him afloat.

Rubio is a terrible Senator. He hates the job, hates the process, and has never accomplished anything of note. He probably figures that the anti-immigrant racist element of the GOP will dissipate with Trump and that if he can be the bridge to the Latino vote, he can expect to have a better chance at winning than anyone else.

Four years is a long, long time. The next star of the Republican Party might be someone we don't expect--someone who can give a speech from a teleprompter that does not immediately force good people to vomit in a bucket because of the racism and the misogyny. Rubio imagines himself to be that guy again, and all he has to do is trick Florida into giving him another term so he can screw around and do nothing on their dime.

Oh, yeah. He's star material all right. Must be the normal-sized hands.