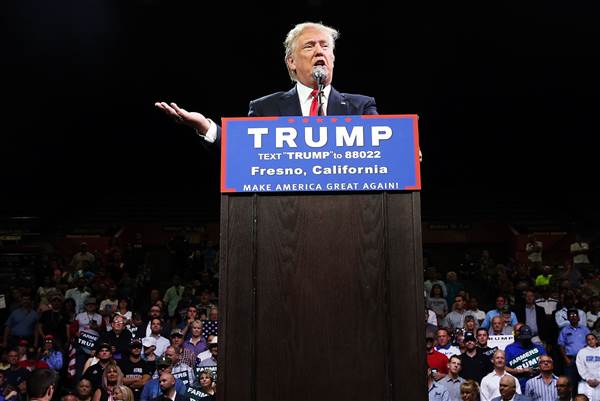 If it's a day of the week, Donald Trump must be out there trying to pit one group of Americans against another group so that white nationalists and racists can feel good about voting for him:

Presumptive Republican presidential nominee Donald Trump railed against the judge in the legal battle over Trump University, telling a large crowd Friday in San Diego, "There should be no trial."

U.S. District Court Judge Gonzalo Curiel "happens to be, we believe Mexican, which is great. I think that's fine," Trump added of the judge, who was born in East Chicago, Indiana.

But he's "not doing the right thing," Trump told the rally.

"I have a judge who is a hater of Donald Trump, a hater, he's a hater," he continued. "I'm getting railroaded by a legal system that frankly they should be ashamed."

This is exactly what Americans want in a president--no respect for the rule of law, a willful ignorance of the legal system, an fetish for running his mouth off about things he does not know, and a man who enjoys pandering to the most racist elements of American society. Anyone who uses the ethnicity of the judge to decry the American legal system should not be allowed anywhere near the Executive Branch of government. Or government, period.

I am thinking about writing down the names of each and every person who publicly supports this man so I can pull it out in five years. I can guarantee you one thing--those people will not pay the price for their support for this racist, bigoted fool and they will be on television for years and years, yapping about how they know more about politics than everyone else. They will develop Trump-nesia, a form of amnesia where they forget that they did not have the courage to stand up and call this man a virulent, un-American racist. Look at everyone who supported the Iraq War. They're still on TV and they're still convinced people need to hear what they think.