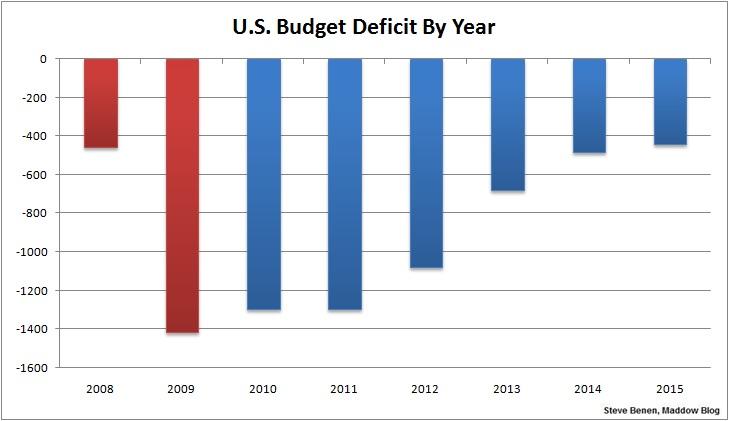 Next year, you'll be swamped with stories about how the deficit is going to consume all of us like a flesh-eating volcano of horror and leave our kids a million dollars in debt:

In the not-too-distant past, talk in the political world of the U.S. budget deficit was all the rage. As the Tea Party “movement” took shape, conservatives quite literally took to the streets to express their fear that President Obama and Democrats were failing to address the “out of control” deficit.

Congressional Republicans agreed. As recently as 2013, Sen. Rand Paul (R-Ky.) was asked about the radicalism of his political agenda and he responded, “[W]hat I would say is extreme is a trillion-dollar deficit every year.” Around the same time, then-House Majority Leader Eric Cantor (R-Va.) arguedthat Congress should be “focused on trying to deal with the ultimate problem, which is this growing deficit.”

The Republican rhetoric was ridiculously wrong. We don’t have a trillion-dollar deficit; the deficit isn’t the ultimate problem; and it’s not growing.

For the fiscal year that ended Sept. 30 the shortfall was $439 billion, a decrease of 9%, or $44 billion, from last year. The deficit is the smallest of Barack Obama’s presidency and the lowest since 2007 in both dollar terms and as a percentage of gross domestic product.

Keep in mind, in the Obama era, the deficit has shrunk by $1 trillion. That’s “trillion,” with a “t.” As a percentage of the economy, the deficit is now down to just 2.5%, which is below the average of the past half-century, and down from 9.8% when the president took office.

Three other things have gone down as well--bankruptcies related to health care costs, unemployment, and the number of soldiers killed in Iraq and Afghanistan. The fact that those things have dropped along with the deficit--as well as a whole host of indicators--shows you just how lucky we were to have President Obama and how lucky we'll be when Hillary wins this fall.

If we put more people back to work and if we straighten out our tax system, the deficit will continue to shrink and things will get better for many Americans. Wages need to go up and we need to keep Obamacare. If we fail to elect Hillary, they'll gut this country and leave the carcass by the side of the road. Nobody should fall for the bullshit argument that this election doesn't matter. It's the deficit that no longer matters. And who would you rather have running the economy?

The answer has always been Hillary and they know it. They know the economy does better under Democrats. Her opponents will go into full obstructionism mode. The Republican-controlled House (very little chance right now we can take that any time soon) will put the brakes on Hillary's agenda. They will throw the deficit and the national debt out there and they'll demand that she fix it because they're terrified she will spend money to fix the problems of working Americans.

They absolutely cannot have a situation where she shores up Obamacare and puts even more people back to work in jobs with good wages. Whatever she does get out of these clowns will be disappointing and incremental, but we have to support her no matter what. The alternative is ruination and defeat.