The Balls on This Guy 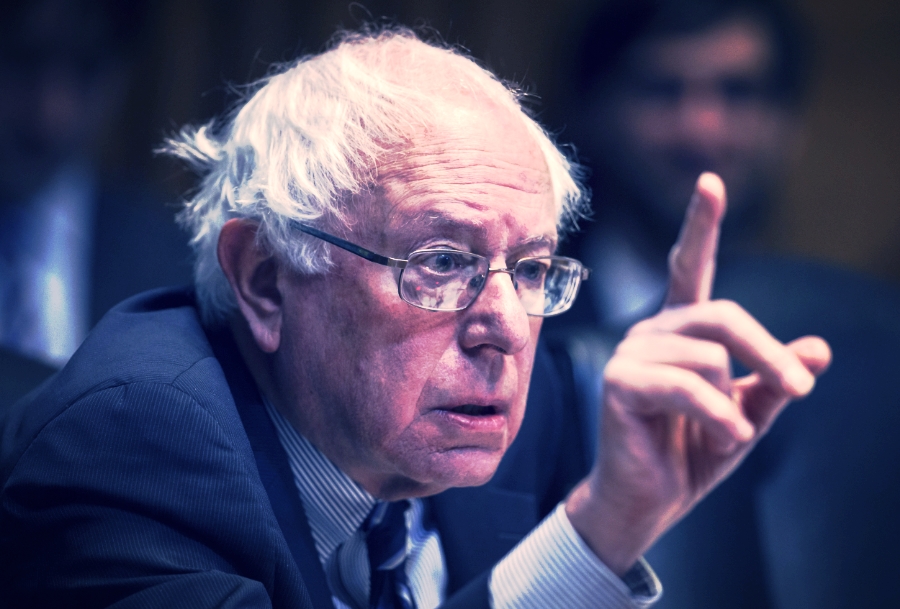 Is this really happening? Bernie Sanders is telling Hillary Clinton who she can pick as a running mate. He's telling her who is "pure" enough and he's issuing a threat that he hasn't made before. He's saying that the loser of the primary gets to pick the Vice Presidential candidate for the person who won. When did that become the precedent for how things are done in any political party anywhere?

Senator Bernie Sanders doubled down on his warning to democratic rival Hillary Clinton that her pick for running mate will be critical to winning over his supporters going into the general election during an interview to air Sunday on "Meet the Press."

"That means having a candidate who can excite working families, excite young people, bring them into the political process, create a large voter turnout," Sanders told Chuck Todd.

The Vermont senator was adamant that Clinton pick a hardline progressive for vice president if she successfully secures the Democratic nomination for president. This could help her appeal to the supporters who have flocked to Sanders' campaign during the primary.

Asked whether Virginia senator Tim Kaine, who's rumored to be on Clinton's short list, is the kind of running mate he's recommending, Sanders said, "I really like him very much," but declined any further speculation.

We have reverted to the days when party "leaders" subverted everyone's choice and went with their agenda. Sanders isn't accepting his loss when he echoes the old way of doing things--he's really choosing an anti-democratic (small d) position that cannot stand up to any scrutiny. Does he really think that he has a say in who gets picked?

This is how Bernie Sanders lays the groundwork to do two things--one, he's going to deny any legitimacy to Hillary Clinton as a candidate and, two, he's going to create some sort of a scenario where his endorsement and support network gets behind a third party candidate (Johnson of the Libertarian Party or Stein of the Green Party) when his conditions aren't met. I haven't wanted to speculate on that so far, but it really looks like he is going to do whatever he can to destroy comity in the Democratic Party and cause a rift between the people who support him and the larger Democratic Party base. Today he went that extra step further than anyone was willing to admit was possible just a few weeks ago.

I mean, holy hell. This is bad. Really, really bad. I hope people see this for what it is--a declaration of war against the legitimacy of the entire Democratic Party. Sanders is intent on denying the presidency to Hillary Clinton by any means necessary.

If she doesn't pick a "hardline progressive" then what? What happens if he's not happy with who she picks? Does he, as the loser of the primary, then go after that person and call them a corporate sellout as well? Does he allow his surrogates to savage the person who agrees to serve on the ticket? And does he make it harder for Hillary to find someone to agree to run with her?

Who in their right mind would agree to run as Vice President knowing that Sanders and his followers are going to attack them, given that there's already going to be an unprecedented attack from Donald Trump waiting for them? People go into public life with all kinds of expectations of being torn to pieces for their views and their positions. I don't know of anyone who would welcome being hit by a crazy orange billionaire from one side and from the people screaming about their insufficient purity from the other side.

Dictating strict conditions to the winner as to how to proceed takes the kind of balls only found on someone who has already made up their mind to burn the whole thing down. Sanders isn't just building a fundraising scheme that will keep bringing in the money after this election cycle. He is going to sabotage the entire Democratic Party and bring the house down around him. We won't just lose the presidency--we will lose our best chance to take back the Senate and gain ground in the House. We will lose more than we'll ever know because no one wants to accept the outcome of the primary and move forward.

This is not the behavior of someone who wants to see the country in the hands of a competent leader. This is how someone acts when they want to see Donald Trump running everything into the ground.