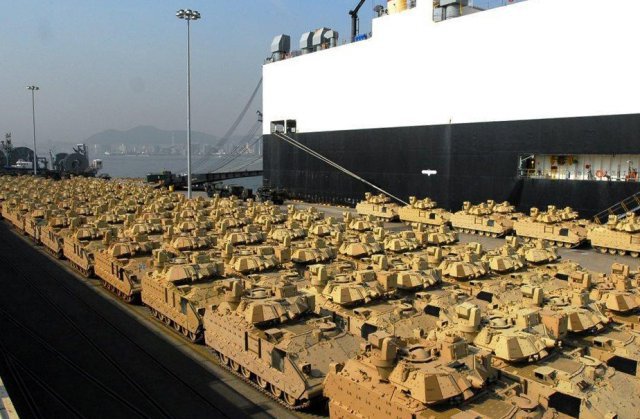 If only President Obama would lead, the Middle East would be just like South Korea:

More fundamentally, the administration’s fatalism ignores a fourth policy option that Obama, from the beginning, was determined not to try: patient, open-ended engagement using all U.S. tools — diplomatic as well as military — with a positive outcome, not a fixed deadline, as the goal.

That is an approach that has worked before. In Korea, the United States forged an intimate alliance more than a half-century ago, and today U.S. soldiers and diplomats are still present. U.S. support deterred an external foe while — and people forget this, given South Korea’s stability today — helping steady a society torn by civil war as its people gradually built a democracy.

Obama came into office determined to avoid this approach. In Afghanistan, he set a timetable for troop withdrawal, untethered to conditions. In Libya, he bombed the Gaddafi regime out of power but did not stay to help a new government get on its feet. In Iraq, he overrode his civilian and military advisers and declined to keep in the country the 15,000 or 20,000  troops that might have helped preserve the stability the U.S. surge had helped achieve.

In the Middle East, you have Shia and Sunni adherents who are opposed to U.S. policy. They are willing to kill Americans and destroy their own countries in order to advance their goals. Leaving tens of thousands of Americans in Iraq would have accomplished one thing--we would have continued to see them come home in body bags to defend a corrupt government not worth saving. Our departure did not create ISIS--invading the country set that wheel in motion when we carried out a policy of de-Ba'athification.

In South Korea, you have a homogeneous population united against a common enemy. The Korean War was a police action carried out by the United Nations. Our presence there has shrunk to the point where it will be more of a bother for the South Koreans to watch us get on planes and boats and leave than it would be for the massive South Korean Army to hang back, wait til the North Koreans run out of gas, and then bomb them into oblivion from the air. There are barely 30,000 Americans serving in South Korea, and that number shrinks every year. There are about 600,000 South Koreans on active duty and another 2.5 million in the reserves. We provide logistical support and, when the balloon goes up, most of the Americans in South Korea are not going to be in combat--they're going to be headed for the exits. And many, many South Koreans don't want us there anymore--don't forget that. But they're not triggering IEDs to blow up the Kimchi bus as it heads from Camp Humphreys to Osan Air Base.

When you do what this president has done and reverse the greatest foreign policy blunder in American history, there will always be  handful of pundits who spend decades running away from their support for said blunder. Fred Hiatt is one of those pundits, and he's completely and utterly wrong. He's as wrong as Jim Hoft, and hereby replaces him as the newest stupidest man on the Internet.

How does Hiatt still have a job? What an embarrassment.