Did you know Hillary Clinton does not know what she's doing and that she has walked into Donald Trump's brilliant trap?

Donald Trump has set a big, fat trap for Hillary Clinton, and so far she has stepped right into it. He turned his attacks against women against her. She is, he argued, playing the “woman card.” And Clinton anted up, offering her supporters the chance to buy a “woman card.” From now until Nov. 8, Trump will surely continue to insult women. If Clinton routinely responds to those attacks, Trump will turn her into the “women’s candidate,” and she will lose. She is already perilously close to being that candidate.

Let’s be honest. Polling shows that Trump has a problem with women, but it also shows that Clinton has a problem with men. Thanks to Bernie Sanders’s pushing and prodding over the course of the primary, Clinton’s vision has expanded, but we all know its core: She is a battle-tested warrior for women and children.

Consider her slogan, “Fighting for us.” For many men, this slogan would have to be experienced as emasculating. A woman fighting for them? Rightly or wrongly, the slogan rubs the wrong way in relation to traditional notions of masculinity. Her slogan itself reveals a limited conception of who she seeks to represent. This is a potentially fatal flaw in Clinton’s campaign. The more that Clinton takes Trump’s bait around the issue of his denigration of women, the more powerfully this flaw in her own campaign will show itself.

Well, damn. All of that sounds great in theory but in reality, the thing people don't understand is that Trump has won by appealing to a very small slice of the overall electorate. The Republican Primary voter is completely and utterly outnumbered when compared to the actual block of people who will vote in November, and they live in states that are already written off when we calculate the race by Electoral College votes.

A million people in Georgia might vote against Hillary, but they're going to be wiped out when everyone in New York, Pennsylvania, and New Jersey vote for her--and this is especially true when women and minorities vote for her as well. It's not that their angry, anti-women votes don't count. It's that the overall strategy for winning the presidency by appealing to angry white males in the South isn't a recipe for winning anything other than about a 160 out of 538 Electoral College votes.

I don't know if that's a trap that Hillary has walked into or one that Donald Trump blundered into because he does not understand the American process of electing a president, but there you go. Here's where I'm going with this:

Trump wants to rumble with Clinton in a battle of the sexes because he believes that it will be losing terrain for her. He is right that this ground favors him. After all, this is the terrain on which the #NeverTrump campaigners largely fought him, and they have failed.

Now, I don't know if you are aware of this, but there are more women who vote than men. It's a statistical fact:

Out of reported voters, women swamp men 49 to 43 percent. In much of the country, this amounts to an Electoral College lockout for Clinton that will guarantee her a victory. Yes, you can alienate angry white men and actually win a Federal election in this country. Play the woman card and play it often is the lesson here.

I mean, this is the current Electoral College projection: 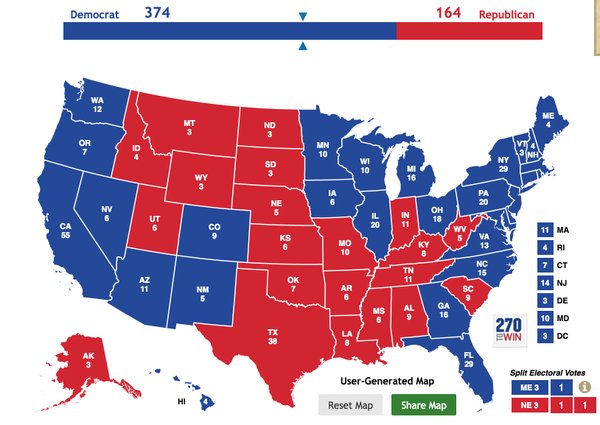 So, if Hillary is going to lose the November election, she should stop pointing out the fact that Donald Trump has already mathematically lost the race by alienating women voters who will help carry the demographically large states with the most electoral votes (except for Texas, of course)? Really?

I don't work at Harvard and I damned sure ain't getting published in the Washington Post, but if that's not the dumbest thing I've read all day, what is? The last thing Hillary needs is to listen to an opinion columnist at the Post who isn't thinking about the race in terms of the Electoral College. And if anyone doesn't think she hasn't already planned for month after month of negative campaigning, they're deluding themselves into thinking they have something relevant to say about American politics.