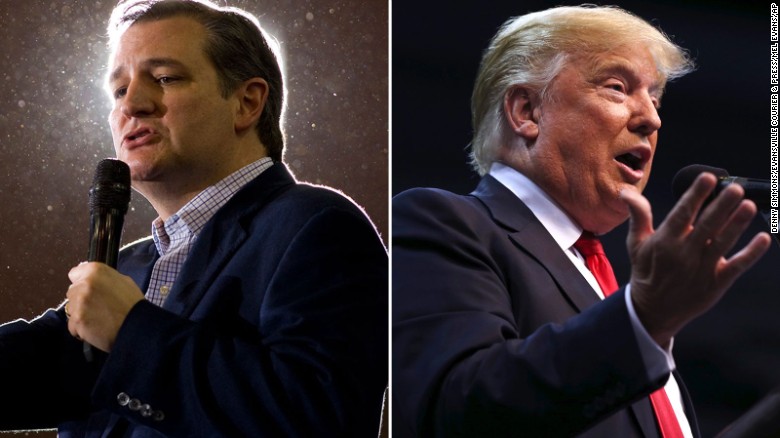 I don't know a lot about God, but she's got one helluva sense of humor:

Ted Cruz on Tuesday unloaded on Donald Trump, accusing him during a news conference of being a "pathological liar," "utterly amoral," "a narcissist at a level I don't think this country's ever seen" and "a serial philanderer."

"He is proud of being a serial philanderer ... he describes his own battles with venereal diseases as his own personal Vietnam," Cruz said, citing a decades-old Trump appearance on "The Howard Stern Show."

It would never dawn on Cruz to wonder why Trump has everything he wants--a beautiful wife, lots of money, the respect of at least 33% of the American electorate, and more delegates than he'll ever get. It must have something to do with God. She specifically likes Trump better, apparently, and he can't handle it. None of them can handle it. Trump has what they crave, and it all comes down to sex. Trump's wife and ex-wives are incredibly hot pieces of ass, in the Republican parlance, of course, and only a just God would award them to a pious believer. Thus, God is unjust, and she has no mercy for the frantic meat pounders who are feeling the pull of defeat and despair right now. The mere fact that Trump rolls in the filth with the world's most beautiful women means the Devil came round and made a deal of some kind, and God laughed when she saw what the terms were.

Ted Cruz is incredibly intelligent when it comes to book smarts and all of that has now failed him. He looks at Trump and sees the works of God and the Devil as one. And now he's going to be president? What happens when the Devil sends that hellhound to collect on what is owed and God turns her back? Cruz is here to save us but we're all too dumb to get it. His pops thinks so.  And someone should keep an eye on Glenn Beck because, man, that guy is about to take some bath salts and commit heinous acts of public nudity on boiling hot asphalt.

This election cycle, which seems over but it never will be, makes me wonder about 2020 and 2014. That's what's ahead of us, if we all live long enough to see it, and those elections are either going to be insane shit sandwiches boiled in crazy gravy or they're going to be remarkably staid conversations about where the country is headed. This whole silly season is like a Limp Bizkit album that no one's heard before. It's the album they abandoned when they were on drugs and the tapes were set on fire and then played backwards through a Russian knockoff tape deck with no polarity. This high volume screeching gives no pleasure to the human ear but you can't turn away because it vaguely sounds like Ted Cruz turning his back on all that he believes.

Our female God is preparing to smite someone, and, brother, you better not be at that rally. She is pissed. And she was never with Ted Cruz, of course.