What Happened to Bill Clinton? 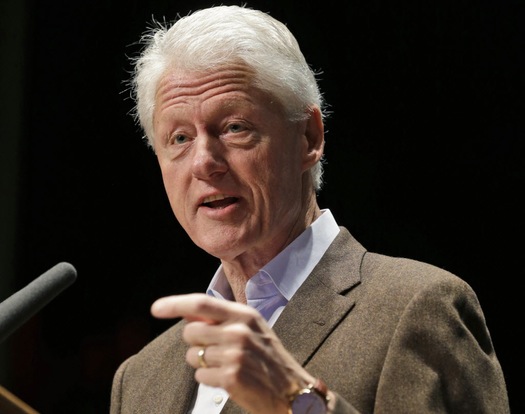 My rant at Charlie's place, as follows:

We will never be rid of these people.

The "fundamental flaw" of the Democratic Party has been an unwillingness to embrace the fact that Barack Obama came out of nowhere, didn't have any of that 1990s baggage hanging off of him, and wiped the floor with the Clinton machine in 2008. That should have encouraged a serious candidate to run for president this year as a legitimate alternative to Hillary, allowing us to move on like a healthy population of people should.

No, Bernie Sanders is not that alternative--he has a vague idea that the big banks are bad but he does not understand the fundamental structure of the banking industry--Barney Frank, he ain't. Martin O'Malley is a regional punch line, written in shattered glass on the sidewalks of Baltimore. And Jim Webb's ship sailed without him on it. Everyone got out of Hillary's way and this is what we're left with--she's a terrible retail politician who has to answer for the tired old record of America's greatest retail politician who is off his game and is too rusty to be allowed out of the house with car keys.

Hillary's greatest advantage this cycle was her ability to energize the African-American vote and her husband just about destroyed that with one ill-timed temper tantrum. Hey, lucky for us there is no one running on the Republican side of the aisle who has any idea how to exploit that.

Shame on Bill Clinton for not knowing the story of why Black Lives Matter has been protesting in Minneapolis. Hint--it ain't because some of them fellers were hopped up on the goofballs. It was because of the execution killing of a black man by the police in a community that has endured decade after decade of police on minority crime. Shame on him because he spoke in Minneapolis less than two years ago and accepted an award and talked about Civil Rights. You'd think a guy would be up on his current events.

Yes, I'll vote for her--there is no sane alternative. But we should have seen another Obama coming from a long way off this time around. I think we are cursed with the knowledge that we're only going to get one of him, and we're damned lucky did.