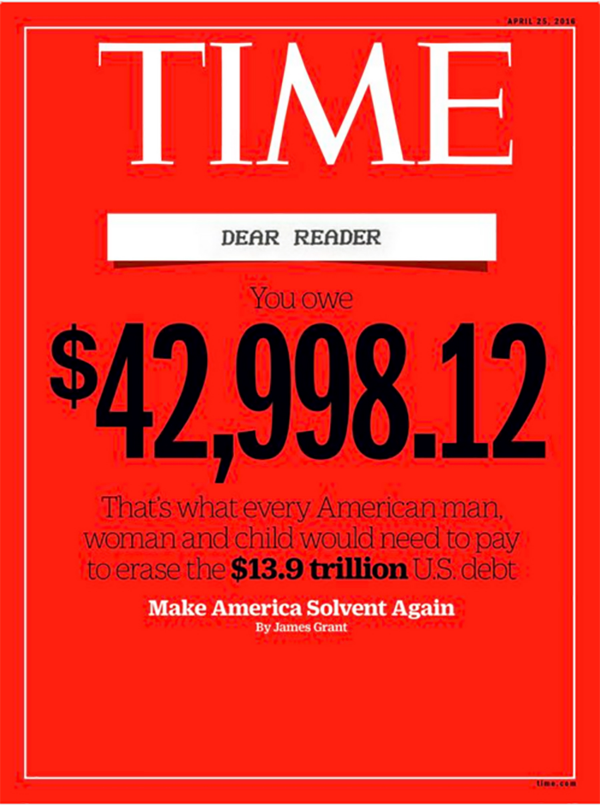 There's almost no use commenting on what gets put on a magazine cover. It's a commercial decision--a business strategy--and it usually fails. The magazine business being a near-dead thing anyway, what's the point? Well, the latest issue of Time Magazine plays that same old song and dance (no, it's not an "incredible shrinking president" or "the amazing secrets of the brain" or "do animals think?" cover) that we will hear for the rest of the year through the presidential election and beyond.

Namely, the Democrats have spent us into oblivion and only the "daddy" party can put our fiscal mess in order and save us from debt, woe, and ruin.

Matt Yglesias (I never link to him, either) says this is bullshit, and I suppose he's right. But this is not wonky statistic time. This is "I've lived long enough to see this flimflam come around a few times, and brother, don't fall for it" time. And you kids out there should know one thing--the Republicans created most of our debt. They cut taxes on the rich, invaded Iraq, and spent us into a raging fury. They're the ones who can't create jobs, properly regulate capitalism, and manage our foreign affairs. They're the reason why we have as much debt as we do.

And, to be candid about it, the debt doesn't matter that much because, hello, Democratic presidents tend to pay it down over a long period of time and grow us out of recessions, so it's all good.

How many twenty-somethings actually buy magazines, by the way? And how many old people are going to shit themselves trying to cash in their 401K so they can send $43K to the gubberment so they can get out of their imaginary hole?

Not many, my friend. Not many.