This Whore Feels So Much Better Now 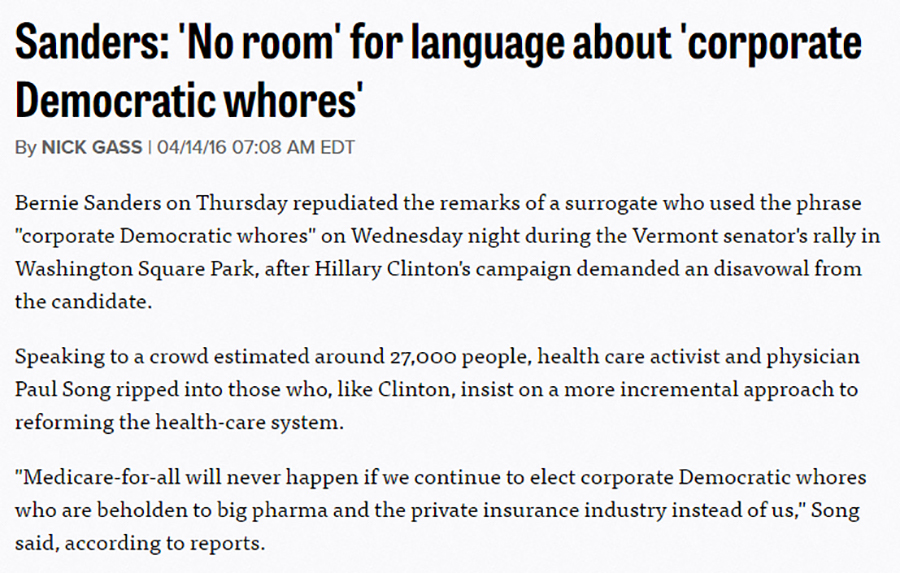 I am not beholden to big pharma or the private insurance industry, but I am a whore nonetheless.

In the world of the Internet, I can make this all about me! Yay! And while I am glad that the Bernie Sanders campaign is going to try and stop calling people like me a whore, I must confess--my whoring started a long time ago and continues to this day. You see, I am a whore because I have a job and I believe that the Democratic Party is the best choice for me in order to keep my job. I tend to look at statistics and the ones I look at show a country that is a helluva lot better off when the Democrats are running things. Not perfect, of course, but someone's idea of perfect means that a bunch of people have to suffer sometimes. We live in a resource scarce world. It'd be great if we could have free everything all the time, but we can't.

I've seen administrations come and go, and when Republicans are in office, jobs disappear and companies lay people off and constrict themselves. When Democrats are in office, they generally expand and hire people and go after profits. It's a cyclical thing, obviously, and it loosely correlates to who is running the country. The last eight years have been a steadily improving proposition for many Americans. A lot of people aren't better off and a lot of people will be much worse off if we elect a Republican this year.

What makes me a whore is my firm belief that if you elect a Democrat who pisses off the business community, they'll go apeshit and start throwing things and bust stuff. I'm not happy that business concerns have so much power but I think we have to be realistic about it and go with a candidate who isn't going to piss them off because, hell, they do give her money and they do recognize her as the sane alternative to a lot of horrific scenarios.

Am I a sell out? Yeah, well I was a sell out the minute I had kids to feed. Am I a whore? You betcha. Proud of it. See the reason above. Kids need feeding. The country needs to be run. The last eight years have been pretty good when you consider the alternative. Not great, but better than if we were in nine wars and answering to a seven Justice Supreme Court that just outlawed homosexuality and fair pay for women.

I'm not going to try and defend being such a corporate whore, though. Feeding his kid was never a priority for Bernie Sanders. He just kind of let that one slide and kept doing whatever he wanted to do. I don't know if I can respect that because I sure as hell can't vote for that. Priorities being what they are, I'll own being a whore so long as I get to feel good about taking care of my family and living a country lucky enough to have had President Obama running things.