This is How Bad Salon is Right Now 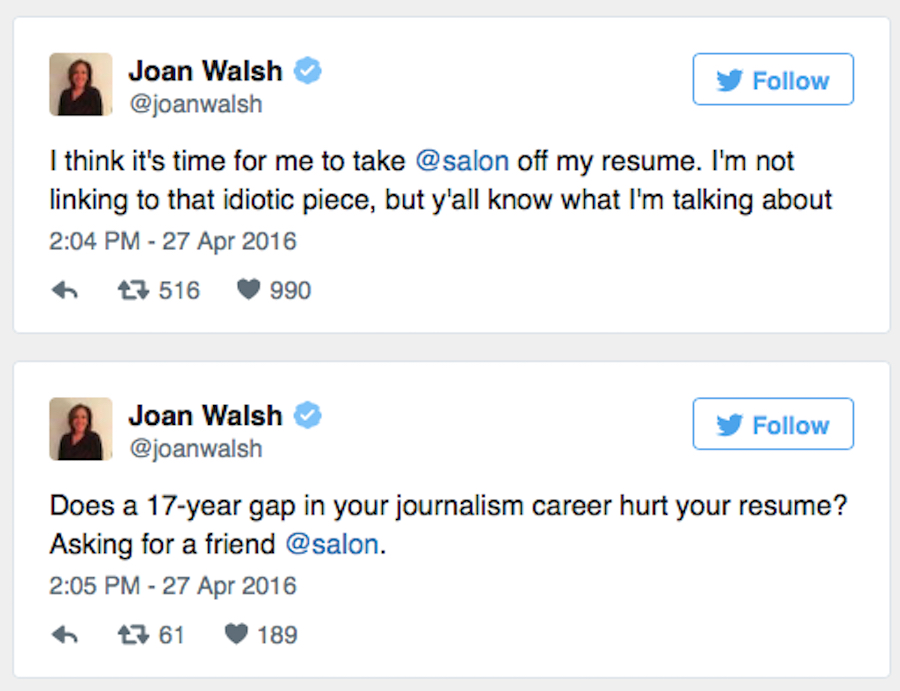 How bad is Salon right now? Well, it's bad enough for Joan Walsh to start a discussion with her followers about removing Salon from her resume.

I don't know exactly when it started--probably at least a year ago? Does that even make sense? You could tell something was wrong with Salon. You could tell that the stories--and the inclusion of so-called think pieces that were written by Camille Paglia--were building up to a ridiculous counterweight to the kinds of things that Breitbart has been doing on the right. Salon is now Breitbart without trying to ruin people's lives. It has little or no credibility with me now and I have removed it from several lists of bookmarks because I simply don't check it anymore.

When a site goes downhill, it's because of what's driving the tenor of the stories. Their political and social stuff is off the charts ridiculous and not just because they're in the tank for Bernie Sanders. They know he's not going to win, has no specifics, and is creating a fundraising scheme just like Ron Paul and they still think he's going to give them free college next year and turn America into a cooler version of Sweden. Their cultural writing isn't worth looking at anymore, either. You used to be able to go there for some really great pieces on music and television. Not so much anymore.

I don't want to say that Salon is shrill about criticizing racism or anything like that--nine times out of ten, there's something to agree with there. I went through a lot of Britney Cooper's pieces and damned if I didn't start to realize that she was right and that everyone else was running years behind her in terms of accepting the truth about police violence and racism in our society. In fact, I lament the fact that I don't get that kind of checkup now and again because I stay away from Salon. I mean, H. A. Goodman is now Baghdad Bob and no one needs that when there are already fifty Baghdad Bobs working the conservative side of the house.

They are all in on the anti-Hillary attack from the left and that's not going to change. What used to be a reliable bellwether on liberal commentary is now hawkish and unreadable and unremarkable. I put it in a category with The New Republic and Andrew Sullivan--not worth reading and why did I ever bother? Well, when Joan Walsh was running things, it certainly wasn't embarrassing, was it?