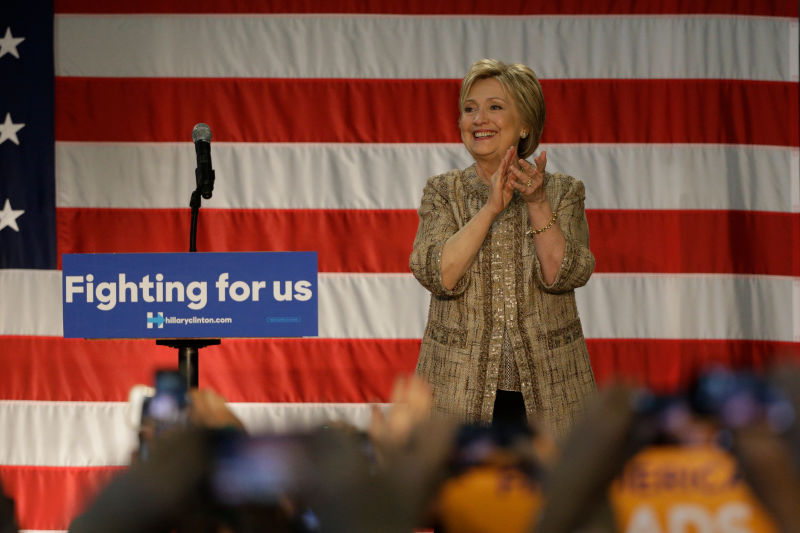 Hillary really needs to bury Bernie Sanders before May rolls around:

The online ad buy, the group said, is the largest of its kind: It will target young voters, Latino/as, African Americans, and women, and will be spent exclusively on video. (The super PAC will also spend $90 million on TV ads in the same states.) Priorities spokesman Justin Barasky says that the buy would help “level the playing field” in the general-election campaign. From the Post:

So far this 2016 cycle, the group has raised at least $104 million. There was $44.5 million in the bank at the beginning of March and an additional $49 million in commitments, according to campaign spending reports. Most of that money came from Fred Eychaner, a Chicago media executive and major Democratic donor, but also included donations from supporters including actress and activist Jane Fonda.

The group initially didn’t plan to start spending on advertising until the general-election season, but jumped in early in February to help Clinton win over black voters in the South as she faced a tougher-than-anticipated challenge from Sen. Bernie Sanders (Vt.).

This is great news for web publishers, who’ve watched their ad revenue plateau (or plummet) of late. If only the election were longer.

I suppose this is proof that the system is corrupt and rigged. And it is! This is an insane amount of money and shouldn't be spent on political ads. But that's not the sort of thing a Republican is ever going to say, so the Democratic candidate has to spend this money to fight the negative ads that are coming and the negative campaign tropes that have been coming non-stop all winter and spring.

In far too many past elections, the Democratic candidate would tell the truth (Mondale) or tell the honest to God truth (Carter) or explain how things really work (Dukakis) or offer up a sane alternative to insanity and bullshit (Kerry) and would lose. Now, we're getting somewhere. This is the first election in my lifetime where the Democratic candidate has really moved ahead of the Republican candidate in terms of doing what it takes to win.

That's a good thing, too.