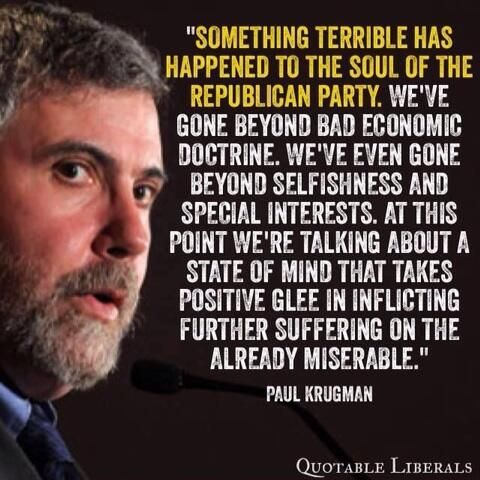 Really, all you can take away from this is an appreciation for the fact that Paul Krugman knows what he's talking about and the people who support Bernie Sanders do not:

Krugman needs a reality check: Wonkish policy details about economic reform are irrelevant. Sanders isn’t an economist. Neither is Clinton. As president, his economic initiatives will have more to do with whom he surrounds himself, not with whether or not he gets it exactly right about the role of the “big banks” in the 2007 Great Recession.

And Sanders is right enough. Big banks, with their bloated indebtedness and irresponsible lending and support for risky derivatives that even they didn’t always understand contributed greatly to the meltdown. Further, these bankers took the bailout money they received from taxpayers and gave themselves big bonuses the next year (until they were shamed into temporarily rescinding them).  So, Sanders, I expect, will surround himself not with Wall Street insiders like Lawrence Summers and Timothy Geithner (these are more likely Hilary supporters and fellow-travelers) but, instead, with progressive economists like Dean Baker, Joseph Stiglitz, Robert Reich, and Krugman, himself. The economic policy details that Krugman now demands will most likely emerge from this Sanders-led brain trust, not from a candidate interview with the N.Y. Daily News.

Furthermore, I think Krugman should quit being a martyr by repeatedly saying that Bernie supporters are out there accusing him and other anti-Sanders ideologues of being “corrupt or even criminal.” I’m not sure where he is finding this left wing McCarthyite paranoia?  By which reputable Sanders supporters is he being scapegoated in such a ridiculous way? It’s as if Krugman wants to wrap himself in the cloak of being a renegade victim when, in reality, his pro-Hilary bias puts him squarely in the liberal establishment mainstream.

Krugman should get his head out of his “inside-the-academic economics-blogosphere” and think about real world politics for a change.  Sanders understands that even were he a policy wonk, the President can’t make radical stuff happen without the support of a social movement agitating for such change. And it is here that Sanders and Krugman parts ways, since Krugman doesn’t identify as a political activist and is hardly radical when critiquing moronic Republican orthodoxy or Paul Ryan. But Sanders at least has a cursory appreciation of the absolute necessity of building grassroots support for his radical proposals.

Shorter rant--how dare Paul Krugman expect details from a Democratic presidential primary candidate. That's not fair! And, to be honest with you, I still think this piece was intended as satire but ended up getting published by accident.

Anyone who was paying attention during the Bush years knows that Paul Krugman has his heart in the right place. The fact that he prefers one Democratic politician to the other doesn't mean he's now Karl Rove and Rush Limbaugh rolled together with Sean Hannity and Sarah Palin. Come on--the man who gave us all a reason to pay attention to what candidates say they are going to do is going to have an uncompromising take on the things that actually get said.

And if you haven't been paying attention to what Bernie Sanders wants to do and what he thinks this Congress is going to let him do, you're kidding himself. Every single one of Sander's ideas are dead on arrival in a Congress run by Republicans. I mean, jeeeee-zus. Who are you when no one's around to watch you do backflips with misbegotten rhetoric?