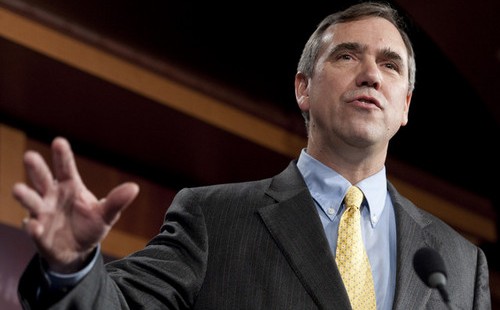 Someone convinced Senator Jeff Merkley to tell the world what he knows:

Unlike the Republican primary circus, Democrats have a choice between two candidates with lifelong track records of fighting for economic opportunity and who are committed to America’s being a force for peace and stability and who are eager to meet today’s challenges and move our country forward for all its citizens, together.

From her time advocating for children as a young lawyer to her work as first lady of Arkansas and the United States, and as a senator and secretary of state, Hillary Clinton has a remarkable record. She would be a strong and capable president.

But Bernie Sanders is boldly and fiercely addressing the biggest challenges facing our country.

In other words, I'm voting for Bernie because Hillary hasn't promised me anything and I'm afraid to say bad things about her. This is tepid and silly. It's navel gazing.

Which is fine, but I doubt Merkley's endorsement will move the race. If Bernie Sanders can't do well in Oregon, he can't do well anywhere else. This is typical of the kinds of moves that a politician on the fringes of the party will make when they don't believe they have anything to lose by trying to raise their national profile. Sometimes it pays off and sometimes it doesn't. Despite being able to see very clearly that Hillary's going to win the nomination, Merkley went with Sanders in order to shore up his progressive credentials. Wonder who he's planning on selling out.