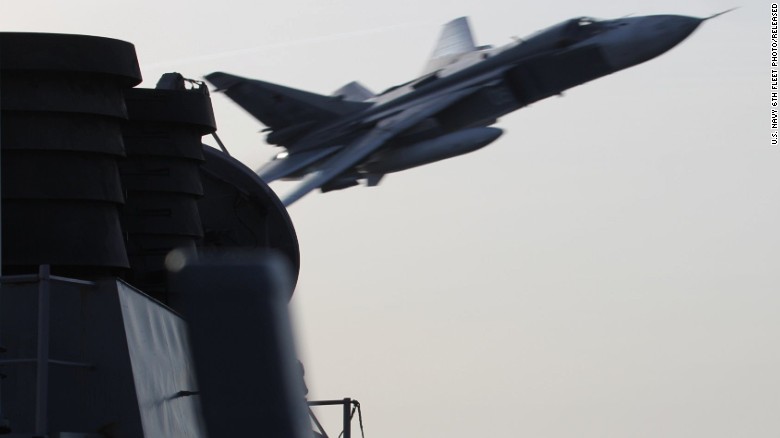 This is the latest foreign policy nightmare of epic proportions (if only Obama would lead!) that is facing America as we slide into the abyss and end up in danger of being wiped off the face of the Earth (according to our media, of course):

Two separate close encounters between the Russian and U.S. militaries in recent days have left many wondering if future incidents could result in an armed clash.

Pentagon spokesman Capt. Jeff Davis told reporters Monday, "There have been repeated incidents over the past year where Russian aircraft have come close enough to other air and sea traffic to raise serious safety concerns."

"Unsafe and unprofessional actions by a single pilot have the potential to unnecessarily escalate tensions between the two countries," he added.

After two Russian fighter jets flew within 30 feet of the USS Donald Cook last Tuesday, Secretary of State John Kerry warned that the Russian action could have resulted in the jets being shot down.

Kerry told CNN en Español that "under the rules of engagement, that could have been a shoot-down, so people need to understand that this is serious business."

Do nothing. Do absolutely nothing in the face of Russian insecurity and they will continue to fall apart. The Russian military forces are certainly capable of operations, but they are hollowed out and barely held together with what little Russia can still spend on weapons. Operate as if they do not exist and that will continue to drive them crazy. Let their pilots risk their own lives; let them blow out engines and waste resources accomplishing nothing. The Russians can no longer project their forces beyond a very small logistical chain that has all but collapsed.

Do not feed the bear. They're just trollin' y'all.