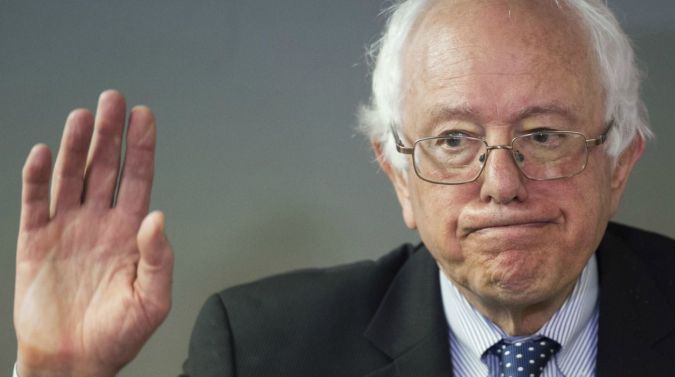 Talk about an unforced error:

Bernie Sanders said Wednesday that Hillary Clinton is not "qualified" to be president, a sharp escalation in rhetoric in the Democratic primary.

"Secretary Clinton appears to be getting a little bit nervous," he told a crowd in Philadelphia. "And she has been saying lately that she thinks that I am 'not qualified' to be president. Well, let me, let me just say in response to Secretary Clinton: I don't believe that she is qualified, if she is, through her super PAC, taking tens of millions of dollars in special interest funds. I don't think that you are qualified if you get $15 million from Wall Street through your super PAC."

CNN has reached out to the Clinton campaign for comment, and its surrogates responded quickly on Twitter.

"Hillary Clinton did not say Bernie Sanders was 'not qualified.' But he has now - absurdly - said it about her. This is a new low," campaign spokesman Brian Fallon tweeted.

This is exactly the sort of thing I would not have seen come from Bernie Sanders. A surrogate, perhaps, but not the candidate himself, and it's shocking and wrong. It is wrong on so many levels that I cannot even begin to come up with the right mix of curse words and indignation.

She's qualified. Shut the hell up with anything else. Good God, she's as qualified to run as anyone.

Here's the thing--Bernie Sanders believes this because he's not a Democrat. He's using the Democratic Party as a vehicle, but he's not a member of it in good standing. All of the complaints about Debbie Wasserman Schultz are fairly cut and dried (and I think she should have been removed months ago) but her efforts to deny Sanders the nomination are driven by the fact that he isn't really a believer in what the Democratic Party stands for. And, for progressives, you have to hold your nose and accept that there's a corporatist streak that allows money and access to flow in and out of the party through donors on Wall Street.

I just want to reiterate that--you're never going to get everything from any candidate. The system is rigged to produce as little change as possible. You can grow up and accept that or you can watch a Republican thrown everything into the wind. You can watch them loot everything for years on end and destroy every shred of progress made in the last eight years if you want. I'm not about to stand still for that. Nope.

It sucks--believe me, I get it--but you simply cannot win a national election in this country without taking Wall Street's money and compromising some of the loftier goals of reining in corruption. Cue the people who hide behind the purity troll mask--it's just not possible to forge a centrist, national coalition and win the presidency without getting into bed with some really disgusting people. You have to accept that there's power out there that isn't going to be reformed overnight. You have to be willing to live in a world where your candidate lets you down once in a while. But there's no question--A Democrat like Hillary is not going to pursue the same agenda as any Republican anywhere. She's going to tax the hell out of these people and she's going to push regulation further than anyone currently running on the other side. She's going to achieve good where good can be wedged between slime and agony on the public policy front. She's going to lose a lot of battles that Bernie Sanders wouldn't have a chance of winning and she's going to win just enough to make having her as President look like a damned good deal.

Is she going to let people down? Of course--that's the price of getting some of their money in order to be competitive. It's the price of doing business. Adults know that the political process is icky and no fun but is necessary in order to achieve the incremental changes we've seen over the last eight years.

Bernie Sanders is perpetuating the Republican talking point that Hillary can't be trusted. That's bullfuckingshit and he jumped into it with both feet. His lack of dignity and grace here is appalling.