An Epidemic of Poisonings 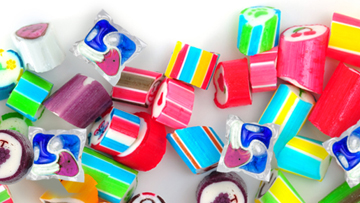 I can remember when kids would go into old refrigerators and suffocate. That led to all kids of freakouts and whatnot--crazy stuff like either taking the doors off of the things or making it so they could be opened from the inside or making it against the law to abandon them altogether. Of course, people have calmed down since then. That is, until they started making horrible poisons look like candy:

Calls to poison control centers increased 17% from 2013 through 2014, according to an analysis of national poison data published Monday in the journal Pediatrics.

More than 22,000 children, mostly under age 3, were exposed to laundry packets in that period. About 30% of them were "already in or en route" to health care facilities when the call for help came in.

The data identified life-threatening problems that occurred only when children were exposed to packets of laundry detergent, including cases of children who stopped breathing, went into comas or suffered cardiac arrest. Two children died. The packets can also cause vomiting, throat burns and eye injuries.

Canada has this page, for example, and it's over a year old. We've seen these stories crop up but it doesn't really move the needle in this country. We need a consumer protection agency with serious bite--enough of a bite to, I don't know, get these damned things banned, perhaps?