A Monster For All Seasons 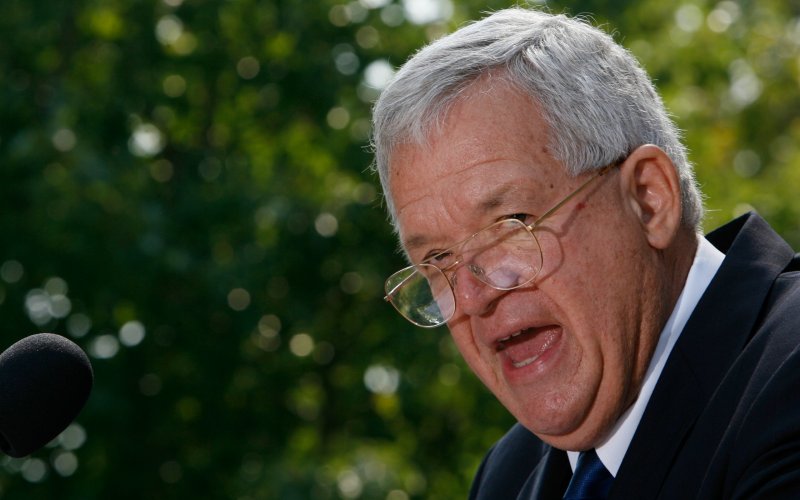 No mercy for Dennis Hastert, please:

Former U.S. House Speaker Dennis Hastert’s lawyer requested Wednesday that a judge give him probation instead of a prison sentence for his conviction on hush-money paid to a man who said the Illinois lawmaker sexually abused him as a teen. But a new Chicago Tribune report Thursday alleges that three additional men have made “credible allegations of sexual abuse” to law-enforcement officials, saying they were also targeted as teens during Hastert’s tenure as a high-school teacher and wrestling coach in Illinois. The first accuser, who reportedly received $1.7 million from Hastert, is the focus of the indictment. Another man, whose identity remains unknown, has reportedly told prosecutors he is considering speaking at Hastert’s federal sentencing on April 27. Hastert pleaded guilty in October for trying to pay out a total of $3.5 million in hush money. “Mr. Hastert has made mistakes in judgment and committed transgressions for which he is profoundly sorry,” his attorney Tom Green said Wednesday. He cited Hastert’s health as a main reason to keep him from being locked up. His plea deal dictates that he would only get six months in prison.

Given the enormity of his crimes as a sexual abuser, there should be no mercy shown to former Speaker of the House Dennis Hastert. As we speak, I can only guess that the chyron on Fox News has incorrectly identified him as a "Democrat" all morning and afternoon). Six months in prison for a hypocrite of this magnitude?

During the 2004 elections, George W. Bush’s campaign, managed by a closeted gay man, pushed a series of anti-gay ballot initiatives across the country. The House of Representatives, led by a male speaker who allegedly sexually assaulted a male minor, moved a constitutional amendment to ban same-sex marriage after beating back attempts to strengthen hate crimes legislation. And the White House, led in part by a vice president with a lesbian daughter, eagerly encouraged a conservative evangelical base hostile to gay rights.

Though only slightly over a decade ago, that election seems increasingly like the relic of a far-off era as the country moves closer toward acceptance of legalizing marriage equality nationwide. But it’s being revisited in light of recent revelations that former House Speaker Dennis Hastert (R-Ill.) may have sexually abused at least two male students during his time as a high school teacher and wrestling coach, and later lied to the FBI about the hush money he was paying one of them.

Hastert wasn’t a strident culture warrior during his time in Congress. But he was a vital cog in the anti-gay political machinery that the GOP deployed for political benefit. And now it appears his involvement carried the same elements of duplicity and deceit as that of other Republican operatives of that era.

“The hypocrisy is breathtaking in its depth,” said Elizabeth Birch, former president of the Human Rights Campaign, which advocates for lesbian, gay, bisexual and transgender rights.

As speaker of the House from 1999 to 2007, Hastert didn’t just go along and vote the party line on various bills; he decided which pieces of legislation made it to the floor for a vote. During his tenure, he was a clear foe of the LGBT community.

Toward the end of his presidency, Bill Clinton was trying to broaden the federal hate crimes statute to cover acts of violence motivated by sexual orientation and gender identity. Calls for such legislation had picked up steam after the horrific assault and killing of Matthew Shepard, a 21-year-old gay man, in 1998. But Republicans, led by Hastert and other GOP leaders, repeatedly barred any such measure from passage.

Tell me again how the "identity politics" of the 1990s were waged by the Democrats? You had hypocrites and sex mad Republicans running amok. We're still talking about the DC Madam story--incredible.