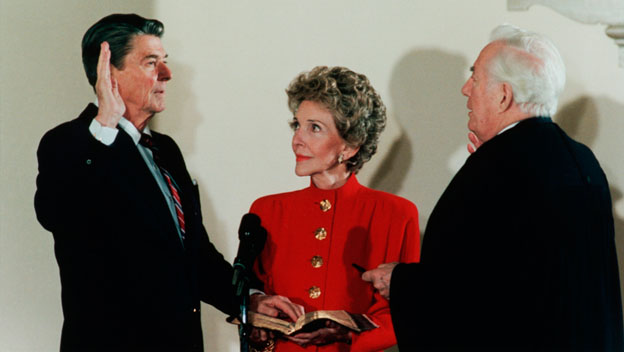 Yeah, let's just gloss over everything and forget what happened in the 1980s:

A California astrologer said she had been consulted by the Reagans regarding key White House decisions, but Mr. Reagan said astrology had not influenced policy.

Followers of astrology believe the alignment of stars and planets influences human affairs. Such people consult charts, based on their birth dates, for clues concerning many decisions.

Mr. Fitzwater said Mrs. Reagan is particularly worried about the impact astrological portents can have on her husband's safety. But he declined to say exactly how Mrs. Reagan had used astrological information. And the President, answering a question at a photo-taking session, said, ''No policy or decision in my mind has ever been influenced by astrology.''

The issue was stirred up by reports, first published in Newsweek, that Donald T. Regan, the former White House chief of staff, discusses the role of astrology in his memoirs. The memoirs are being published later this month by Harcourt, Brace Jovanovich, and excerpts are scheduled to appear in the May 16 issue of Time Magazine. Inauguration After Midnight.

The book will detail the ''kinds of decisions that were made'' under the influence of astrological readings, according to a former Administration official.

Another former official said the President timed his announcement that he would run for re-election after he and his wife consulted astrological signs.

Early in his political career, Mr. Reagan scheduled his inauguration as Governor of California in January 1967 to take place at an odd time, 12:10 A.M. News reports at the time said the decision was made to take advantage of favorable astrological portents.

Did anyone pay a political price for this? Of course not. And you can thank the fawning "liberal" media for all of the other things they ignored because they wanted a "daddy" figure in charge.