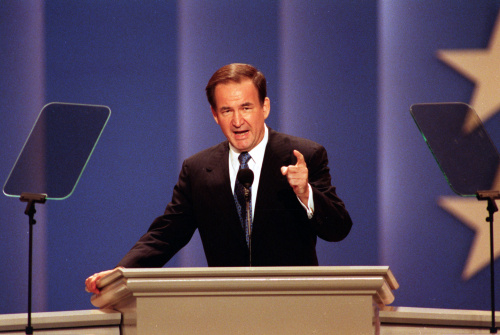 Let's get one thing straight--none of these people were mad when Republicans were really good at being racist in a polite manner. None of these corporations are shy about associating with Republicans who pass laws restricting women from getting health care. None of them are afraid to get in bed with politicians who marginalize minority workers and take away their collective bargaining rights. Nobody here is upset that a Republican introduced legislation hurting working families. No, far from it--they want to get in bed with them and get cozy. These are the things they love. Mainstream Republican policies are the gift that keeps on giving, right in the kiester (don't ask).

What they don't love is how their hired flacks are going to spend the next year explaining their bigotry through close affiliation with Donald Trump:

Some of the country’s best-known corporations are nervously grappling with what role they should play at the Republican National Convention, given the likely nomination of Donald J. Trump, whose divisive candidacy has alienated many women, African-Americans and Hispanics.

An array of activist groups is organizing a campaign to pressure the companies to refuse to sponsor the gathering, which many of the corporations have done for both the Republican and Democratic parties for decades.

The pressure is emerging as some businesses and trade groups are already privately debating whether to scale back their participation, according to interviews with more than a dozen lobbyists, consultants and fund-raisers directly involved in the conversations.

Apple, Google and Walmart are among the companies assessing their plans for the convention, which will be held in Cleveland from July 18 through July 21.

In addition to Mr. Trump’s divisive politics, there is the possibility that protests, or even violence, will become a focus of attention at the convention. Mr. Trump has suggested that there will be “riots” if he is not chosen as the party’s nominee, and the city of Cleveland recently sought bids for about 2,000 sets of riot gear for its police force.

Oh, for the love of God. Please don't point out that we love someone who hates people like a shaking, vulgar manifestation of white privilege in decline. And it would be shrill to point out just how much of a shock it was to have Pat Buchanan run around the 1992 Republican National Convention with his brownshirt hanging out.