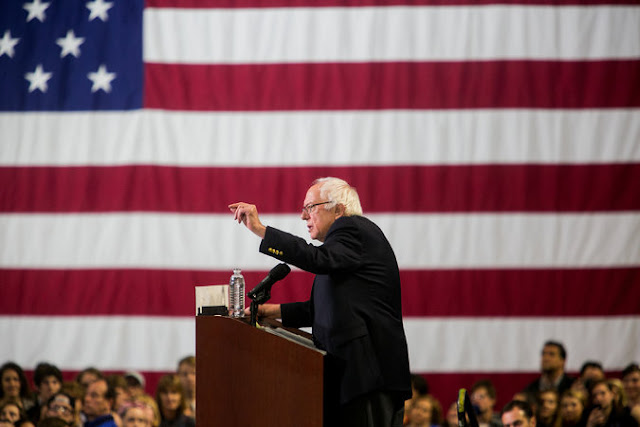 You know, this kind of article just had to be written:

When Bernie Sanders won New Hampshire by a wide margin, he was understandably excited. "Because of a huge voter turnout — and I say huge," he said afterward, drawing out the "u" sound in his distinctive Brooklyn accent, "we won." The turnout overall was not that huge, but Sanders still received more votes than any previous Democrat in the state by a wide margin.

After Nevada, Sanders's worst loss so far, his analysis was different. "What I've said over and over again," he said on "Meet the Press," "we will do well when young people, when working-class people come out. We do not do well when the voter turnout is not large. We did not do as good a job as I had wanted to bring out a large turnout."

Sanders is correct that his campaign comes down to young voters. Less so working class voters, it seems; in Nevada, Clinton won low-income voters and Sanders's margin among those earning less than $50,000 a year in Iowa was under 10 points. But among young voters? Sanders is a runaway favorite, earning multiples of Clinton's support. In Iowa and Nevada, voters under 30 went 6 to 1 for Sanders. In New Hampshire, 5 to 1.

The age split is probably even a more important split than the one on race, in fact. In Nevada entrance polls, younger Hispanic voters backed Sanders heavily, while older Hispanic voters didn't. The Wall Street Journal reports a similar split among African American voters.

In the two states Sanders lost -- Iowa and Nevada -- young voters turned out much less versus their share of the population (as of the most recent Census estimates) than in New Hampshire. Those aged 18 to 30 are a smaller percentage of the population in New Hampshire than they are in Iowa or Nevada, but they turned out about as much in this year's contests. (There are margins of error on these that are not insignificant, but that's not important at this point.)

I'm sure there will be thinkpieces that refute all of this, but what I think has happened is that the Sanders campaign built itself up on a 1960s-styled idealism that is going to resonate for a few more cycles. Nostalgia drives his appeal, and it's an appeal that I can understand. I'd love to have a viable candidate who is as far left as Sanders--who wouldn't if you believe in the Democratic Party and liberalism in general? I just keep running up against a thing called reality.
America is way more ready for Clinton than it is for open socialism. You could say that Sanders is twenty years too early or seventy years too late--take your pick.
Reality dictates that whoever gets elected in November will go up against a divided Congress. The Republicans will control the House until we either solve the problem of Gerrymandering or, duh, solve the problem of Gerrymandering. I don't even think it comes down to money because look what's happening in North Carolina? A state that drifts blue then red then blue again is a state that is probably at home dealing with politicians who game the system. The Democratic Party needs a candidate who is going to be able to control and motivate their base and strike unpopular compromises.
Hillary Clinton's middle name might as well be "unpopular compromise" because that's what her presidency will look like. Surprise! It'll look like Obama's and it will look like her husband's. It would be great if it were otherwise.
Sanders refuses to accept the reality of a presidency that makes unpopular compromises. He used phony pie-in-the-sky numbers to talk up his policy proposals, which are going to be dead on arrival in the House. He tried to game the system and he bet on young people voting. Guess what? They don't vote.