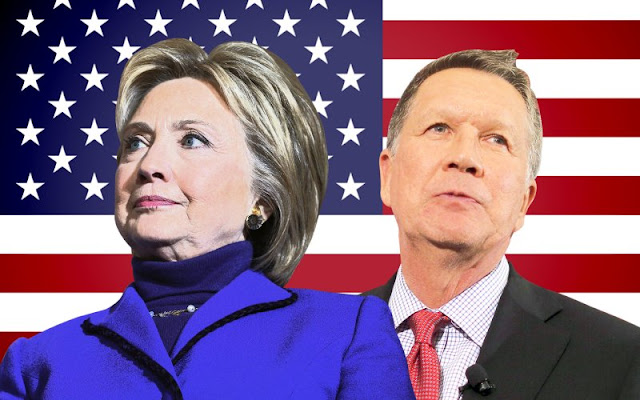 Let me lay down a marker: If either Donald Trump or Ted Cruz is the Republican nominee for president, I predict that John Kasich will jump the GOP ship and agree to run as Hillary Clinton’s vice president. The resulting ticket will virtually sweep the table on election night, create a new generation of “Kasich Democrats” and send the disarrayed and dismayed Trumpublican Party for a long, long walk in the dark, dark woods.

Sound implausible? Maybe. Prognosticating has been a dangerous business this election cycle. I was one of the many pundits laughing off Donald Trump in the early days. I bet that Scott Walker would be the one to thread the needle between establishment appeal and right wing red meat. I was wrong then and I could be now. This election defies description, plausibility, most of the even basic ideals of civility and certainly logic. Nobody knows nothing about how Election Day 2016 will pan out. But keeping that in mind, this is why a Clinton/Kasich team up makes a great deal of sense.

John Kasich is a partisan extremist who has dedicated himself to the destruction of women's rights in Ohio. He opposes everything Hillary Clinton stands for. There's no way she would pick Kasich for anything other than a kick in the nuts. You can only get free of this sort of contrarianism if you swallow this paragraph whole:

After all, no matter how much she tries to pretend otherwise (and she should stop trying!), Hillary Clinton is no progressive. She’s the very definition of liberal centrism—hawkish on foreign policy, protecting big business first and our social safety net second, continuously evolving on social issues but temperamentally favoring triangulation over throwing oneself on a pyre of principles.

Somebody got paid to write this? Unpossible, I would have to say. The art of editing has died.