What Happens When Rubio Loses His Home State? 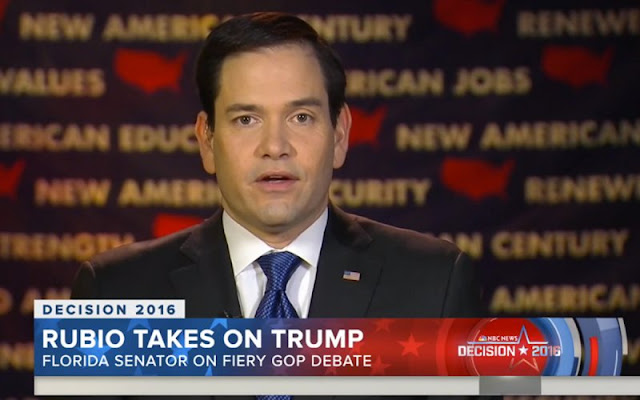 Last night's debate was an utter shit show, but that's what we've come to expect. You would think that the Republican National Committee would put a halt to these affairs. You would be wrong.

Marco Rubio went on television this morning and, with reality staring him in the face, acted like he won something:

In a television interview with Matt Lauer on Friday morning, following a successful debate performance, Sen. Marco Rubio called fellow GOP presidential contender Donald Trump “a con artist” about five times. Rubio added, “I admit I’m an underdog.” But he implored those watching to “put a stop to this lunacy” by not voting for Trump. He continued, “We’re on the verge of having someone take over the conservative movement and the Republican Party who’s a con artist.... His target audience is working Americans who are really struggling over the last few years in this economy, but he has spent a career sticking it to working Americans.”

It sure would be nice to see if our working media could come up with something to answer Rubio on that last point--who's been sticking it to working Americans? The billionaire who actually employs people or the guy who wants to completely de-regulate Wall Street and cut taxes on the wealthy? That would be a rude thing to do.

This is not the Rubio we will see around March 15th after he loses his home state of Florida to Donald Trump. But it's the Rubio who can't understand why he's losing, badly. The only thing that can save him is a serious movement of all available goalposts.