The Uselessness of Clarence Thomas 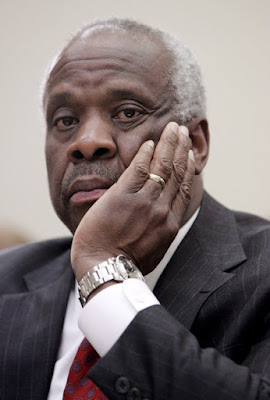 You would think he'd love his country enough to retire:

When the Supreme Court returns from its winter break this month, it will hear two minor cases and reach a major anniversary. Unless something very surprising happens during the arguments that day, Justice Clarence Thomas will have gone 10 years without asking a question from the bench.

You would be wrong.

No one is saying that Thomas should be loquacious and pontificate endlessly. No, it would be nice if he'd show up and care. He shows up, but he's not engaged enough to ask a single question in ten years.

Tell me again why it was "important" to confirm this man? I remember that battle. It should have ended with him being denied a seat on the Supreme Court. Instead, we get years and years of barely-there participation and a safe vote for the Scalia wing of the court.