The Need for a Federal Law 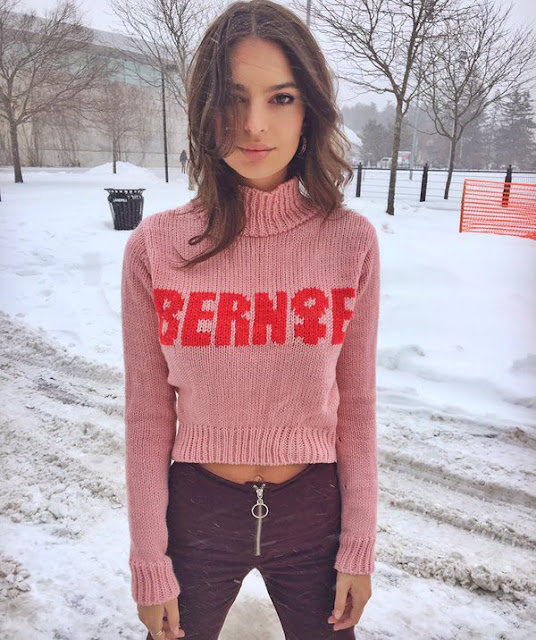 This is an issue that should be addressed by the presidential candidates, but, really, it needs to be dealt with now. Here's what happened when actress Emily Ratajkowski came out in support of Bernie Sanders:

Those are just a fraction of the hate Emily has gotten for being a woman that supports Bernie Sanders. Most of these comments came within a few hours of her first post, so there’s plenty more insults and slurs to be found.

You may be wondering what the significance of all this is, but there is none.Social media is often a toxic place, even more so for women. The companies running these websites do little or nothing to change the environment, and we continue to use their products in spite of that. So it goes.

But in spite of the universal nature of online harassment, a number of prominent Hillary Clinton supporters in the media accused Sanders supporters of being uniquely vitriolic online. Their evidence? Offensive, sexist, and racist remarks from some Sanders supporters that are of the exact sort aimed at Ratajkowski’s today.

To say that this is limited to female supporters of Bernie Sanders is ridiculous--this is what women face every day online! And not only is it wrong, it's a tragedy that we have never addressed properly and with Federal legislation. You wanna go on the Internet and terrorize or threaten people? Guess what? You're going to be face to face with law enforcement for doing so.

In many states, there's a crime called "terroristic threats" or something similar. Basically, when you threaten someone or terrorize them (it has nothing to do with international terrorism), it's a form of domestic violence. One individual who has been subjected to this level of extreme abuse is Zoe Quinn.

Game developer Zoë Quinn has been through an awful lot in the 18 months since an ex-boyfriend posted details of his relationship with her online. But now she's dropping harassment charges against the man who essentially started the GamerGate firestorm because it's not worth the emotional trauma to carry the case forward anymore. "Ironically, getting a restraining order against Creep Throat [Quinn's pseudonym for her ex] was the least effective thing I could do in terms of getting him out of my life for good, and for protecting myself," she writes.

Quinn explains that whenever something happened within the case, her ex would go back and stoke the GamerGate sympathizer fire, and in turn, she (along with family and friends) would be subjected to a new round ofthreats and abuse. "People kept getting hurt for being close to me, for a poorly worded restraining order that did nothing," Quinn says.

She mentions that law enforcement officials, judges and lawyers are incredibly ignorant about how the internet works and at one point someone told her to give up her career and stop going online if she didn't like the abuse. "He barely bothered to look at my huge stack of evidence before declaring he had no idea what the internet was about and didn't want to know." The continual threats are something that's affected her work with Crash Override, the support group she and Alex Lifschitz founded for victims of online abuse, as well.

She says that even if she kept pushing her suit forward, if her ex was imprisoned his legions of followers would see it as martyrdom. Which, based on previous harassment she's endured, Quinn says the would only give them more fuel for their attacks. So rather than continue the fight in vain, Quinn hopes her withdrawal of charges will help her heal and move on.

No one should be allowed to ruin another person's life. We've had laws created to deal with mass media--the libel laws, in particular--and we have laws on the books protecting intellectual property. Now we need to bring the law into the 21st Century. Quinn writes about having to stop, each time she talks to law enforcement, and explain concepts like "user names" and things like that. This is absurd. If you make violent threats against people online, you are not engaging in free speech. You are engaging in the infringement of that person's right to be free to exist.

I'm old enough to remember what happened in the early 1990s. After Anita Hill testified before the Senate Judiciary Committee, and detailed sexual harassment claims that should have led to the firing of Clarence Thomas from the judiciary, she was vilified and he was elevated to the Supreme Court. But what also happened was that the courts began to recognize that sexual harassment was real, and lawsuit after lawsuit addressed grievances and caused a lot of companies to pay out tens of millions of dollars in settlements. That led to changes in society. It did not eliminate the problem but it provided a mechanism for women who were willing to sue companies. Those same companies started firing harassers and training their employees. That's the same incremental change of behavior and law that could help curtail--but never eliminate altogether--what's happening online.

It used to be a matter of shaming people to stop harassing others. Now, we see that sociopaths don't respond to shaming. They respond to incarceration or poverty. We cannot rely on shaming people anymore. We need Federal legislation to protect people online from threats and harassment.