The Joke is On All of Us 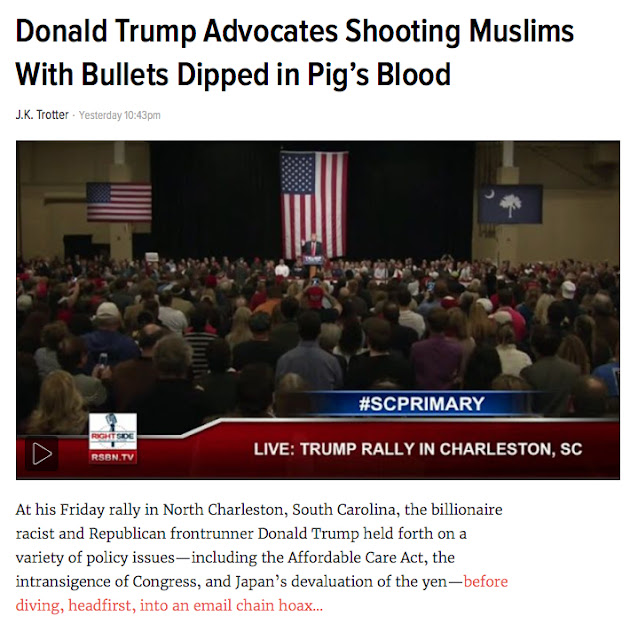 If you viewed what's happening in American politics through the prism of the last ten years, there really isn't anything to be outraged about here. Donald Trump is a celebrity running for President. The fact that he says outrageous things is a feature, not a bug with this man. He has to keep saying ridiculous shit because the media will stop paying attention to the horserace if one of the horses has "low energy" and no fire in the belly. When Trump makes up something horrible and racist and says it to cheering crowds, it means that the modern American political arena is operating under normal conditions. Really, that's what it means.

If you viewed what's happening in American politics through the prism of the last fifty years, oh, shit. Yeah, it's bad. It's really, really bad. I mean, awful in all the bad ways.

I want to do a compare and contrast. Here's what Trump reportedly said:

Trump repeated—favorably—an apparent myth about how General John Pershing summarily executed dozens of Muslim prisoners in the Philippines with tainted ammunition during a guerrilla war against the occupying United States. “He took fifty bullets, and he dipped them in pig’s blood,” Trump said. “And he had his men load his rifles and he lined up the fifty people, and they shot 49 of those people. And the fiftieth person he said ‘You go back to your people and you tell them what happened.’ And for 25 years there wasn’t a problem, okay?"

I've picked a random speech from American political history. This is a sampling of Adlai Stevenson's acceptance speech when he became the nominee in 1952:

It was always accounted a virtue in a man to love his country. With us it is now something more than a virtue. It is a necessity, a condition of survival. When an American says that he loves his country, he means not only that he loves the New England hills, the prairies glistening in the sun, the wide and rising plains, the great mountains, and the sea. He means that he loves an inner air, an inner light in which freedom lives and in which a man can draw the breath of self-respect.

With this patriotism—patriotism in its large and wholesome meaning—America can master its power and turn it to the noble cause of peace. We can maintain military power without militarism; political power without oppression; and moral power without compulsion or complacency.

The road we travel is long, but at the end lies the grail of peace. And in the valley of peace we see the faint outlines of a new world, fertile and strong. It is odd that one of the keys to abundance should have been handed to civilization on a platter of destruction. But the power of the atom to work evil give only the merest hint of its power for good.
I believe that man stands on the eve of his greatest day. I know too, that that day is not a gift but a prize—that we shall not reach it until we have won it.

The blood of pigs. Used on bullets. Bullets that killed human beings. Yeah, we've found the basement and it's only going to go lower and get worse. Yay!