Paul LePage is Worried About Embarrassing the Republican Party 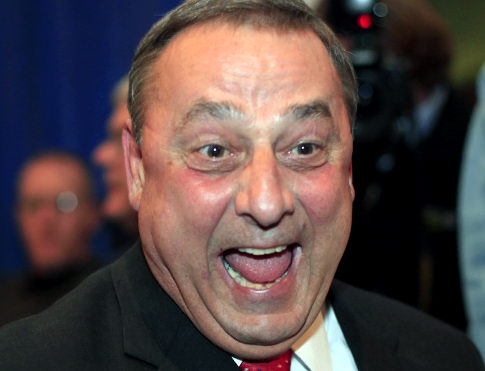 When an insane, racist bigot who does not even know how to properly veto legislation is worried that Donald Trump is going to embarrass the Republican Party, you know that the Chinese curse about living in interesting times has been visited upon you sevenfold:

Addressing a luncheon of Republican governors and donors in Washington on Feb. 19, he warned that Donald J. Trump’s increasingly likely nomination would be catastrophic, dooming the party in November. But Mr. Rove, the master strategist of George W. Bush’s campaigns, insisted it was not too late for them to stop Mr. Trump, according to three people present.

At a meeting of Republican governors the next morning, Paul R. LePage of Maine called for action. Seated at a long boardroom table at the Willard Hotel, he erupted in frustration over the state of the 2016 race, saying Mr. Trump’s nomination would deeply wound the Republican Party. Mr. LePage urged the governors to draft an open letter “to the people,” disavowing Mr. Trump and his divisive brand of politics.

The suggestion was not taken up. Since then, Mr. Trump has only gotten stronger, winning two more state contests and collecting the endorsement of Gov. Chris Christie of New Jersey.

Whoever wrote this story is not aware of the Internet, Paul LePage, or his many, many transgressions against common decency and insightful public discourse. This is the least politically self-aware piece to appear in the New York Times in about an hour or so.

UPDATE: LePage is worried, but not too worried to endorse Trump. (h/t Mark Warren on Facebook).