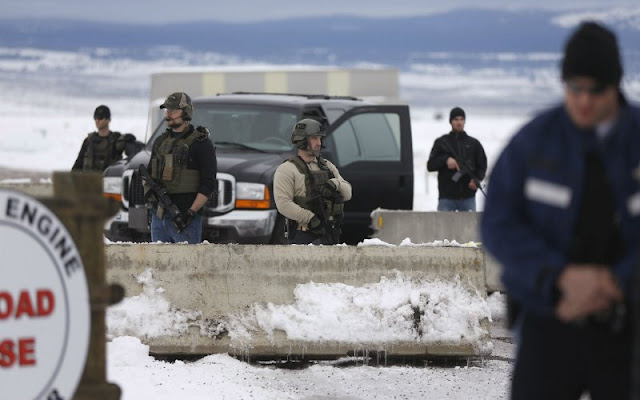 Just for fun, someone should throw firecrackers at their feet when they start walking out.

The last four armed occupiers at Oregon’s Malheur National Wildlife Refuge say they plan to turn themselves in at 8 a.m. PT Thursday. A livestream set up to broadcast the remaining hours in the standoff at the federal property stopped after more than five hours Wednesday night when the group headed to their night camp. “We’re not surrendering. We’re turning ourselves in. It’s going against everything we believe in,” said Sean Anderson, one of the occupiers. The news came after Cliven Bundy, the father of former Oregon occupiers Ammon and Ryan Bundy, was arrested at Portland International Airport late Wednesday on his way to the refuge. The 40-day standoff escalated Wednesday when FBI authorities surrounded the facility after 27-year-old David Fry drove outside of the encampment then allegedly sped back as an agent approached. Nevada legislator Michele Fiore, a Republican supporter of the protesters, drove to the refuge to try to help negotiate a surrender. Cliven Bundy faces federal charges related to the 2014 standoff at his ranch over federal control of public lands.

No? Too soon?
Assuming all of this comes off without a hitch, and that's asking a lot, let's praise law enforcement for being steady and consistent throughout this process. Instead of applying force, they applied boredom and professionalism to the problem. They waited out Cliven Bundy and, sure enough, he did something stupid and now he's in custody along with his sons. The entirety of their accomplishments is summed up in their plea for snacks and their mailbox full of dildos.
There are still huge problems out west with regards to land use, public vs. private, and how we manage these dwindling resources. The Malheur occupation will go down as a case study in how not to engage the Federal government.