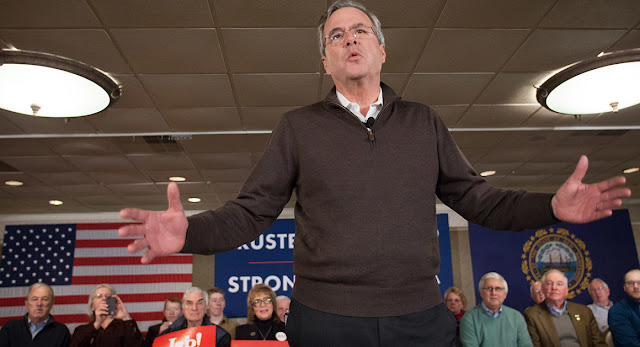 Jeb Bush is afraid you won't forget what a bad campaign he's running:

Former first lady Barbara Bush is "not as great as everybody thinks she is," Jeb Bush said during a lighter moment at a campaign event in Derry accompanied by his mother, in which he joked about her proclivity to discipline.

Recounting how many times people in New Hampshire have come up to him praising his mother, Bush made sure to emphasize just who was the disciplinarian in the Bush clan when he was growing up in Texas.

"I jokingly say that when we were growing up in Midland, in Houston, that mom was fortunate not to have a child-abuse hotline available," he said, as attendees laughed, explaining that "the discipline of learning right and wrong was her doing."

Bush then got choked up in describing his father, former President George H.W. Bush, as "this perfect, idyllic man who to this day is the greatest man alive."

"But she was the one that taught us right and wrong, I can promise you that. And it’s worked out pretty good,"he said. "All the mistakes that I’ve made are my own doing, I can tell you that."

Ha! Child abuse! Hilarious shit that old, white people like! Brilliant. Maybe he should start making jokes about his kid trying out heroin so that he can "relate" to the devastated population of New Hampshire.

This is a good reminder for everyone--Barbara Bush is the worst of them all, and for Jeb to bring her on the campaign trail is a sure sign he's going for the vote of evildoers and matriarchal demons all over New Hampshire. This is a vote he should have locked up a long time ago. But the fire has consumed the Bush family--no one can escape the whirlwind of failure and stupid created by his brother.

People like to remember his father for being a "decent" man. He married Barbara! That should disqualify him from being remembered fondly.