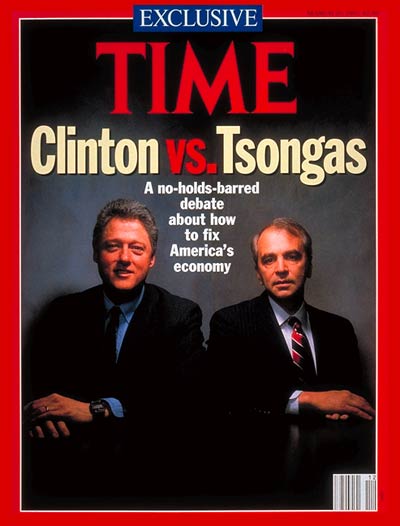 Bernie Sanders easily won the New Hampshire primary Tuesday evening, beating Hillary Clinton with 60 percent of the vote compared to the former secretary of state’s 38 percent, based on 89 percent of returns. “What began last week in Iowa, what voters confirmed here tonight, is nothing short of the beginning of a political revolution,” the self-described democratic socialist told a raucous crowd of supporters in his victory speech in Concord. “We will all come together to say loudly and clearly that the government of our great nation belongs to all of us, not just a few wealthy campaign contributors.” In her concession speech, Clinton congratulated Sanders and vowed to keep fighting, aiming in particular to eventually win over his young supporters. “I also know what its like to stumble and fall,” she said. “It’s not whether you get knocked down that matters, it’s whether you get back up.” In exit polls, some three-quarters of Democratic primary voters under age 45 backed Sanders in New Hampshire, including 83 percent of voters under 30.

Now, if I was on the Clinton campaign, I'd be on the phone with whoever represents Amy Poehler and Tina Fey and I'd be begging them for help. I'd also be wondering what the hell happened and why the Clinton campaign looks like a row boat going up a waterfall. Now is not the time to be kvetching about structural problems that should have been sorted out before Christmas. What the hell were these people doing? Why haven't they been punching harder and going after young people? They're sitting on millions of dollars--give those kids a job. They need it.

Sanders is an insurgency that is quickly gaining steam. He had a regional advantage in New Hampshire, the kind that allowed Paul Tsongas to beat everyone in 1992 and become an also-ran within mere weeks. The Clintons have a great track record in the northeast--nobody really wants them, nobody likes them, but Hillary still did a lot better than Bill did by a country mile.

If you want some perspective, here it is. In 1968, the kids went Clean for Gene and helped Eugene McCarthy gather nearly 3 million votes in the race for the Democratic nomination. This was a race marred by the assassination of Robert Kennedy and the hamfisted ascendancy of Hubert Humphrey. If you think this year is something new, simply compare McCarthy with Sanders. Instead of Vietnam, Sanders is railing against inequality and a rigged system. This is an anti-establishment campaign, and it is not motivating people to get out and vote. The turnout so far has been less than that of the 2000 campaign, if you can believe it.