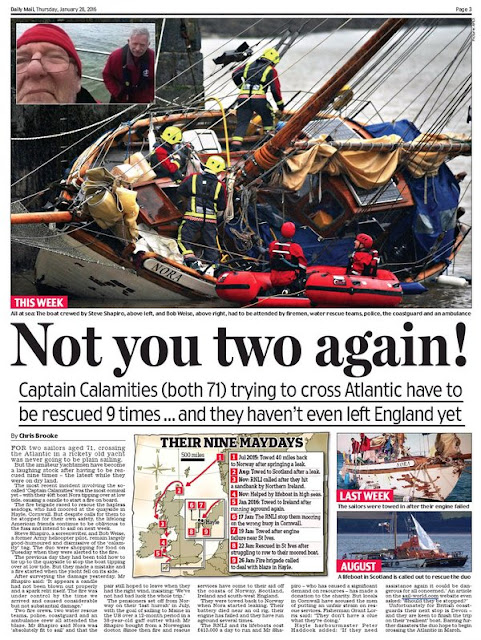 Incompetence seems to be a way of life now:

A hapless American sailor who has been rescued nine times while trying to cross the Atlantic has admitted he is on the verge of finally quitting his calamitous voyage.

Steve Shapiro, a 71-year-old screenwriter from Pebble Beach, California, bought the 44-foot "Nora" in Norway in July. He planned to sail the yacht all the way to Maine by August.

But the expedition home has been marred by mishap after mishap.

Shapiro, along with his 71-year-old sailing partner Bob Weise, has required help from emergency crews in Norway, Denmark, Ireland and the U.K.

The wayward sailors have been met with particular fury in Britain, where rescues were conducted by the Royal National Lifeboat Institution (RNLI), a charity that spends thousands of dollars on each mission and relies on public donations to stay afloat.

There are so many things that people can do nowadays. They can go online, buy a boat, and then go sail it without having to know anything. It's easy! You just type in your credit card. They might make you sign papers, but so what?

As a society, we've done a fabulous job of preventing calamity from killing people. We have first responders, rescuers, planners, observers, monitors, and helpers. We have a whole infrastructure designed to keep people from being their own worst enemy. And yet, we haven't created anything that teaches common sense to idiots. It's as if we assume that bumbling jackasses are there for us to save so we can feel good about ourselves.