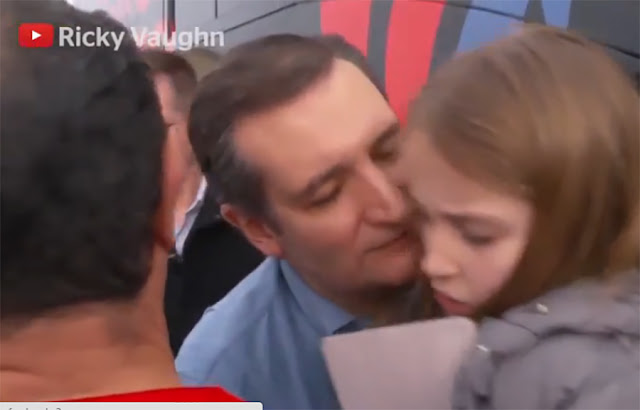 Republican presidential candidate Ted Cruz tried and failed to give his daughter a hug in an excruciating encounter caught on camera.

The Texas senator suffered the embarrassing moment during last-minute campaigning in Iowa ahead of the state's crucial caucus.

A clip uploaded to YouTube has shown Republican presidential candidate and Texas senator Ted Cruz trying and failing to get a hug from his daughter while on a campaign trail in Iowa, the day before the Republican Iowa caucus.

This seems like a natural reaction by Ted Cruz's daughter. And if that doesn't set off warning bells, nothing will.

People who want to tell others how to live their lives and raise their kids--and who use religion as their vehicle for doing so--often have family lives that are horrific. Their kids are screwed up and their "family values" are a cover for dysfunction and creepiness.

The ick factor that surrounds Ted Cruz is beyond comprehension at this point.
on February 01, 2016
Email ThisBlogThis!Share to TwitterShare to FacebookShare to Pinterest
Labels: Commentary, News, Opinion, Parenting, Politics